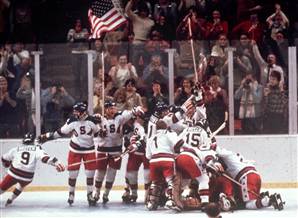 It was Friday night and after work (I was an assistant media planner at ad agency Scali, McCabe, Sloves) I poked my head into a few bars in the vicinity of my office on Manhattan's East Side.  At Cowboys & Cowgirls on 53rd St. I was idly chatting with an older fellow (I was 22 at the time so most everyone qualified as "older") who teasingly mocked my choice of cocktail, a Tom Collins, as being an "old man's drink".  That may have been, but I was a novice and still familiarizing myself with mixed drinks.

While standing at the bar we overheard that the U.S. hockey team had beaten the Soviet team 4-3 at the Winter Olympics in Lake Placid (which made the victory even sweeter).  It was a huge upset and took some of the sting from the the Russian basketball team's controversial defeat of the U.S. at the 1972 Summer Olympics.

Shortly afterwards I met up with a few friends from work and we went to the dance club Stix (formerly the Barefoot Boy) which was a few blocks north of the Queens-Midtown Tunnel on 2nd Ave.  Two particular songs I remember dancing to were Vertigo/Relight My Fire and Don't Cry for Me Argentina (from the classic Disco Evita album).  We stayed until the wee hours and since I lived in New Jersey at the time (Bayonne) I slept over at my friend Phillip's place in the Lower East Side. Although the U.S.'s victory over the Russians was a huge accomplishment it wasn't the end of the story.  In order to win the gold medal they still needed to win one more game.  That match was played two days later on Sunday - and they prevailed over Finland.  This provided a huge boost to a nation whose pride had taken a serious hit a few months earlier as a result of the Tehran hostage crisis - which continued for nearly another year.

(To learn more about this inspiring David-and-Goliath story the DVD Do You Believe in Miracles? and the book The Boys of Winter provide excellent background.)

I am writing a very important history paper on this topic and how the Olympic games influenced American morale during the Cold War. I would like to use the bottom right image, depicting the American flag on top of the world. I have tried to locate its origin, but have been unsuccessful. Do you know where you found it? And, if so, would you happen to know the name of the photographer? Thank you so much, your website has been most helpful.