I graduated from Penn State University on March 3, 1979 but the occasion wasn't tied to any momentous historical event.  Rather, my commencement took place at the height of the disco-dancing frenzy sweeping the nation.  At the time it seemed that Top-40 radio was playing nothing but wall-to-wall disco, e.g., hits such as YMCA; I Will Survive; Shake Your Groove Thing; Le Freak; and Do Ya Think I'm Sexy, to name just a few.  The Village People (whose first LP I bought in the spring of 1978) even appeared on the the cover of Rolling Stone magazine.

After a celebratory lunch in State College with my parents, brother and sister, rather than return home to Pittsburgh I went east with my brother to his apartment in Bayonne, NJ.  (It would serve as my home base while I went on job interviews in Manhattan for a position in advertising.)  As we drove he played a cassette he had made from the wildly popular New York disco station WKTU.  As I caught a glimpse of the Manhattan skyline at sunset Sister Sledge's song He's the Greatest Dancer came on the air. 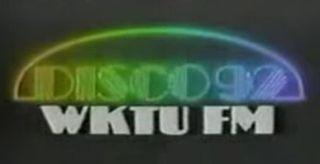 Four months later a backlash to disco music began, largely a reaction by listeners with more rock-oriented musical tastes (and who helped make My Sharona a big hit later that summer).  It was epitomized by "Disco Demolition Night" at Chicago's Comiskey Park on July 12 when a riot ensued after thousands of disco records were blown up as part of a radio station promotion (between games of a doubleheader).  However, gay, black and Latin audiences, who first embraced disco music in underground clubs in the early 1970s, would continue to do so for years to come as it evolved into hybrids such as Eurodisco, hi-NRG and electronica.

(If you'd like to relive the disco era, consider watching the movie 54, reading the book Hot Stuff: Disco & the Remaking of American Culture or listening to a great compilation of classic disco hits.)

Being before my time (thank God) I can only assume that disco was pretty much the same experience that I have when friends drag me out to clubs and bars that play nothing but the exact same R&B/Pop songs played over and over again with a "remix" that includes nothing but a steady drumbeat overdubbed onto it.

The utter disgust I have for this type of music would probably be how I would feel if I were alive for disco as well. The worst part of the whole thing is how many people actually enjoy it...