Spring had arrived two weeks earlier, the 1982 baseball season had begun the day before and Easter was less than a week away.  Yet here it was April 6 and we were under a blizzard warning, the first ever issued for New York in April.  Rain began overnight, changed over to wet snow by the morning rush hour and then the blizzard's full fury set in from 10 AM until 4 PM.  Most offices closed at noon, and the Mets and Yankees postponed their home openers.  I stayed at the office (ad agency Young & Rubicam) until the usual time because I lived in Manhattan and getting home wasn't an issue.

That evening when I emerged from the PATH station in my Greenwich Village neighborhood I turned the corner onto my street and was amazed by the drifts I had to trudge through to get home.  However, despite the snow the bowling league I participated in at Bowlmor Lanes still met. 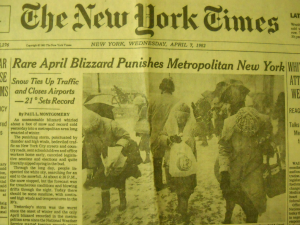 Although Central Park had 9.6" of snow many suburbs reported a foot or more (Albany had 17.3").  It was New York's biggest snowfall in four years.  By midnight the temperature had fallen to a record 21°.  Not much in the way of snow melt occurred the next day as the temperature stayed below freezing - as opposed to a typical high in early April approaching 60°.  (By contrast, on the same date 28 years later New York would report its earliest 90-degree reading.)  Three days later I flew home to visit my parents in Pittsburgh for Easter and it was snowing there (two inches fell).  Thankfully, this wasn't a precursor to an unusually cold April as a string of mild days occurred mid-month and then on April 25 the mercury hit 82°. 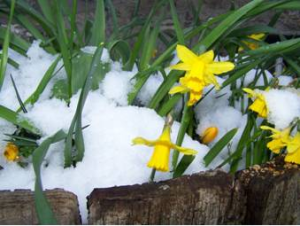 If you love reading about snow, I've written five other posts about New York snowstorms:

And if you'd like to read about other New York City snowstorms, I've written a post on my weather blog, New York City Weather Archive, that recaps the snowstorms we've experienced since 1950.  To go to it please double click here.

The only other time besides the day after this storm that the high temperature stayed at 31 or under during April was on April 5 and 6 of 1881. The low of 21 is the lowest for any date in April except for a phenomenal 12 degrees on April 1, 1923