What I remember most about the shootings at Columbine High School on April 20, 1999 is that I went the entire day without hearing anything about it.  This was highly unusual because I always had the radio on in my office, but I spent this day mostly in meetings in a conference room (at ad agency Foote, Cone & Belding).

It wasn't until I got home and turned on the TV after 7:00 that I heard about it.  It was reported that as many as 25 were dead, but since the school had been locked down until the next morning the true numbers weren't known.  The following morning the death toll was revised downward to 15 (including the two student shooters).

Before Columbine there had been four even deadlier shootings.  They occurred in a post office, two restaurants, and on a college campus.  Columbine, however was the first to have such young targets - and the first to be communicated immediately to the outside world by victims on their cell phones. 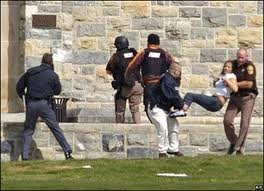 Unfortunately, as with all previous shooting rampages in this country, after an initial outpouring of grief and recriminations, life returned to normal, i.e. a feckless Congress unwilling to buck the NRA and draw up legislation to protect its citizens.  And eight years later, 32 students and faculty were mowed down at Virginia Tech (pictured).  Even that much carnage couldn't change a thing.  And the beat goes on ...