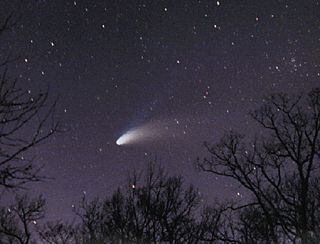 Hale-Bopp was one of the brightest comets to streak across the skies in the 20th century.  And unlike Kohoutek, a much hyped comet that turned out to be a big dud in the winter of 1974, H-B lived up to its hype.  A survey conducted by Sky & Telescope Magazine reported that 69% of Americans saw it during the winter and spring months of 1997.  (The photo to the right was taken in the lower Hudson River Valley). 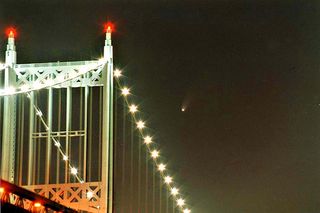 I was thrilled to catch a glimpse of Hale-Bopp, especially since star gazing in Manhattan can be a frustrating experience due to the glare from the city's lights.  It was Wednesday evening on April 2 at around 7:30 and I was doing my thrice-weekly 5-mile jog along the Hudson River in lower Manhattan.  In the Battery Park City neighborhood I noticed a man pointing his telescope across the river in the direction of Jersey City.  I glanced over my shoulder and was stunned to see a slash of light not far above the horizon.  It seemed to be holding still in the sky and had the classic comet's tail.  I stopped running to gaze at it further and then detected a slight, jerky horizontal motion.  It was a very Zen moment.  (My sighting occurred one day after the comet's closest approach to the sun, aka "perihelion".)

A week before my sighting the comet figured prominently in a mass suicide carried out by members of a religious cult known as Heaven's Gate.  39 members, mostly young adults, and the cult's elderly leader Do (pronounced "doe") committed the act in a rented mansion in an affluent suburb of San Diego.  A videotape made shortly before the suicides indicated that a spaceship following behind H-B would pick up their souls.  It was done in a very orderly manner and the victims were dressed in a similar fashion, which included wearing the identical Nike sneakers. 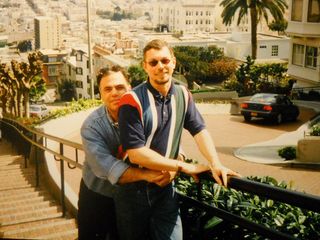 This was also an interesting time in my life (perhaps the comet had something to do with it).  With my 40th birthday looming in May an ex-boyfriend from 10 years earlier reappeared.  "David the Israeli", as I referred to him, was now living in Chicago (not far from Wrigley Field) and suggested I consider moving there as well.  (I attached "the Israeli" to his name because there was a multitude of Davids in my life at the time, i.e. my roommate, boss and a number of co-workers, so to avoid confusion they each had their own descriptor.)  At the last minute he joined me and my friend Tom when we went to San Francisco on vacation in March.  (That's me with David on Lombard St.  I'm the tall one.)  Then at the end of April I visited him in Chicago (my first time there).

It was a whirlwind six weeks but, alas, it didn't work out this time either as the same dispiriting patterns re-emerged (his, of course).  And no appearance from a comet was going to magically change him.  Speaking of comets, if you'd like to learn even more about them the book The Greatest Comets talks about famous ones through history.

I believe the Heaven's Gate cult was one of the main factors in my strong belief in Natural Selection. I support any belief system that includes stupid people killing themselves.

I remember I dug your goatee back then by the way.