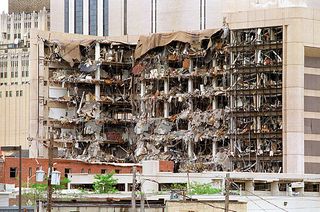 When a bomb tore apart the Alfred P. Murrah federal office building in Oklahoma City on April 19, 1995 I had been at my new job as media research director at New York ad agency Foote Cone & Belding for just a month.  It was a sunny Wednesday afternoon and I was at my desk in my office in the GM Building.  In the background I had the "oldies" radio station WCBS playing (the radio was in the style of one from the 1930s, a send-off gift from my old staff).  It was from that radio that I first heard the shocking news about the explosion that occurred earlier in the morning.

The front of the building had been completely blown off and the death toll slowly mounted as the days went by (the final toll was 168 with nearly 700 injured).  I found it curious when initial reports mentioned children being among the many casualties.  I thought that perhaps a group of students had been on a field trip there.  Later when I got home is when I heard that a daycare center for workers' children was in the building. 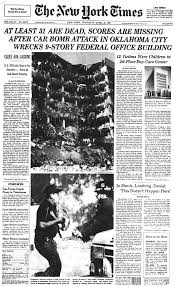 At first many jumped to the conclusion that this was the act of Muslim terrorists, so it was surprising when the FBI showed sketches the next day of two suspects who were Caucasian.  Indications were that the attack was carried out by US citizens who were part of a burgeoning anti-government "militia" movement.  It annoyed me that reporters regularly remarked how awful it was that such an attack happened in "the heartland" as if it would have been less of a tragedy if it occurred in a big city on the East or West Coast. Six years later the driver of the bomb-laden truck, Timothy McVeigh, was executed by lethal injection on June 11, 2001, three months before the attacks on 9-11 - which would surpass the Oklahoma City bombing as the worst terrorist attack on the US mainland.

I vividly remember that day. I was working at Lord & Taylor (and not happy about it) and walked into the lunchroom for my break. I overheard two women talking about the morning's bombing in Oklahoma City, about how it must have been foreign religious extemists. That stoppped me in my tracks. Huh??! I knew right away it was not possible that this was done by foreign terrorists - come on, Oklahoma City, OK? I said to the two women, "This was done by an American." The two of them were appalled that I would suggest that. I reminded them about Waco in 1993 - the showdown between a religous cult and the FBI that ended in bloodshed, both parties at fault. I said, why in the world would foreign terrorists target Oklahoma City? The home of the FBI bureau of Alcohol, Tobacco and Firearms?" They just stared at me. Two days later, I saw the same women again in the lunchroom and they said, "Boy, you hit it right on the head," which I thought was a poor choice of words. Sometimes you hate being right, but I knew this was a home-grown crazy behind an attack on the FBI. Rachael Maddow on MSNBC tonight is doing a two-hour special about Tim McVeigh - should be creepy. I would like to see the memorial that was erected at the site.

I remember thinking more of Columbine than of Waco. "Those nutty mid-westerners and their guns and explosives and militias."

In the face of growing government control and corruption, it strikes fear into my heart when I hear that certain members of the Tea Party movement have discussed creating an anti-government militia of their own.

I meant that I thought of this in connection with Columbine when it happened, not that I saw the future of course.