South Africa's selection as host of soccer's 2010 World Cup was a great honor since it was once a pariah state for repressing its black population.  Back in mid-June 1976 the world's attention turned to the all-black township of Soweto after police violently repressed a student protest there.  The protest was in reaction to a law requiring schools to provide instruction in the Afrikaans language, the tongue of the minority white population (which enforced the legalized separation of the races known as apartheid).  Violent altercations with police resulted in hundreds of deaths and the incarceration of thousands.

I read about the uprising in the morning paper, the Pittsburgh Post-Gazette, as I drove with my parents and sister to my cousin Karen's wedding in York, PA.  We left on Friday, June 19.  Driving east from Pittsburgh, the trip of 175 miles took about four hours.  My brother Darrell drove in from northern New Jersey and provided music during the ceremony, playing a number of trumpet solos. Rather than the traditional Wedding March he played Trumpet Voluntary by Henry Purcell and Processional & Recessional by Eugene Hemmer.

It's painful for me to admit, but I wore a get-up that was more appropriate for Soul Train than a family wedding, i.e., a wide collared, bold brown and white patterned qiana shirt and platform shoes that made me tower over everyone.  (And the platform part of the shoes was made out of rattan.)  Looking back I don't know what was I thinking but I also wonder why my parents or sister didn't say anything?  In my defense it was the 70's and I was 19. 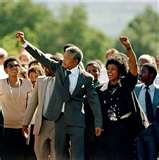 The Soweto uprising was a turning point for South Africa's black population as the world's press remained focused on the struggle there.  This attention ultimately led to boycotts and ostracism by the world community.  Still, it wouldn't be until the early 1990's before the apartheid regime was finally dismantled.  In June 1990 long imprisoned freedom fighter Nelson Mandela and his wife Winnie were honored with a ticker-tape parade in lower Manhattan celebrating his release from prison earlier in the year.  (Hollywood embraced this hard fought and inspirational struggle with a number of acclaimed films including Cry Freedom, Sarafina! and A Dry White Season.)

BONUS. Here is a vintage music video of the 1984 protest song Sun City by Artists United Against Apartheid (featuring artists such as Bruce Springsteen, Hall & Oates and Pat Benatar) that called for performers to boycott South Africa's Sun City entertainment complex because of its whites-only admissions policy.  Parts of the video were filmed in New York's Washington Square Park.

Unfortunately (but fortunately for me) no photo evidence exists of me on that day. And I wish I could erase it from my memory!