My memories of the Royal Wedding are linked to a personal career milestone.  On the late July morning in 1981 when Prince Charles and Lady Diana Spencer's nuptials were held (it was a Wednesday) I had my fourth, and final, interview at ad agency Young & Rubicam for a position as a senior media planner on the Eastern Airlines account. 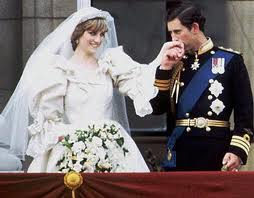 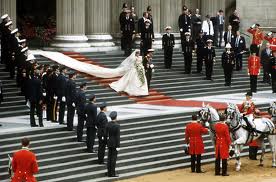 I had been at my first job with Scali McCabe Sloves for a little more than two years and was ripe for a move (four of my colleagues had left in the previous few months.)  And while Scali was a great place to start, its reputation was largely due to its creative product.  Going to Y&R would be like getting an Ivy League education in the discipline of media planning, so I jumped at the chance to interview there.  For this last interview I wore a new suit from Saks that I bought earlier in the month (a 3-piece blue pinstripe for $185).  While getting dressed I watched some of the TV coverage of the wedding and saw Diana as she glided down the steps of St. Paul's Cathedral after the ceremony (which took place at 6:15 AM EST).

Later that morning I got the call with a job offer from Polly Langbort, the doyenne of Y&R Media Planning, and I eagerly accepted.  I started my new job on August 11.  My energetic new boss, David Verklin, was a rising star with the company.  At the time he was still in the relatively humble position of media supervisor but a number of years later his career took off after being hired as media director at San Francisco agency Hal Riney & Partners where he directed the media strategy behind the high-profile launch of GM's new Saturn line. 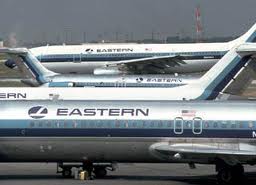 Alas, six weeks after I started my new job Eastern took its account of 17 years to Campbell-Ewald in Detroit where Eastern chairman Frank Borman's old Navy buddy was CEO. (Borman is best known for being Commander of Apollo 8 which was the first mission to orbit the Moon in December 1968).  Fortunately, Y&R had recently won enough new business so my job was secure (I was reassigned to work on the Chee.tos and J&J Band-Aid accounts).  And speaking of airlines, another big news story at this time was the strike by 11,000 air traffic controllers who President Reagan fired and replaced a week later.  And while on the subject of strikes, Major League Baseball players went on strike in mid-June and stayed out until July 31.  This resulted in a split season and a complicated post season.

Of course, we all know that once Diana's and Charles' wedding day was behind them the world's most transfixing soap opera began.  The following video clip from the end of the wedding ceremony is amusing because of the dour look on the Queen's face - as if she already knew how the next 10 years would unfold. 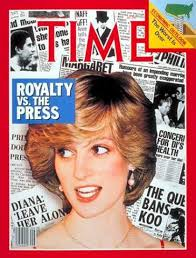 The book Diana, Princess of Wales: How Sexual Politics Shook Up the Monarchy discusses the repercussions the Queen may have been concerned about.

My supervisor at the time of the wedding was English, and spoke with a heavy British accent. She bought me a commemorative Prince Charles and Lady DI ashtray, which I still have. I know exactly where it is. I remember Diana being interviewed after the wedding and being asked how she liked being married, and she said, "I highly recommend it." Also, I'm recalling a dirty joke about the couple that was circulating at the time.