A 10-day heat wave was about to end when Diana Ross gave her much publicized free concert in New York's Central Park on the evening of July 21, 1983 (the high temperature hit 95° that afternoon).  And as hundreds of thousands of her fans streamed into the park severe thunderstorms were bearing down on the City.  I wasn't part of these throngs since I was never one for huge NYC crowds, especially those attracted by a free event.  Instead, after work I walked to Saks on Fifth Avenue to buy an outfit for my newborn nephew, Corry, who had been born the week before - making me an uncle for the first time.

After making my purchase (white terry cloth pajamas with blue polka dots) I hurriedly walked to West 34th St. to catch the 'F' train downtown to my apartment on West 15th St., hoping to get there before conditions got too bad.  I almost made it.  The image that stays with me was the creepy color of the sky as I walked along 34th St.  With the rain pouring down the ominous clouds turned from a Wizard of Oz gray to a sickly mustard-yellow and moss-green, colors I'd never seen before - except in a J. Crew catalog.  It was a true tempest and I wouldn't have been surprised if a funnel cloud had formed.  (More than two inches of rain poured down between 6:30-9:00.)

Despite the turbulent conditions "Miss Ross" valiantly continued with her show (which began at 6:00) as she was pelted by rain and buffeted by strong winds.  At one point she referred to the torrential downpour as a "love shower" before the concert was stopped after 45 minutes because of danger posed by lightning.  And that's when things got even uglier.  As the soaked crowd of 400,000 began streaming out of the park some concertgoers were set upon by marauding gangs.  The press referred to it as "wilding".  (It was a crazy, raucous time in New York back then.) 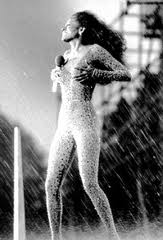 Happily, the concert was rescheduled for the next day, a Friday, and the weather couldn't have been more beautiful.  And I took the train out to Roselle, NJ and held my little week-old nephew for the first time.

The book Diana Ross in Central Park provides an in-depth background into the planning and execution of the concert.

Here's a comment sent to me via e-mail from my friend Ann:

I don't even remember this. What planet did I live on? I don't remember the moon landing at all. I do believe my parents had purchased a TV by then; we didn't have one until I was about 7 or 8, so 1965, but we did finally get one. Not that we ever watched it. It was in my parents' bedroom. Eventually, they let us have a TV (probably so they could sleep late, but we only watched the Banana Splits and Get Smart and Batman...and cartoons like Speed Racer and Gigantor). I know we didn't watch the news, ever. My mother does not have TV now and does not listen to the news. But she reads the Times. My folks got The New York Times delivered and read it every day, but we kids didn't. When I got to high school, in 10th grade, our headmaster said we should be reading the Times every day...I was nonplussed. Really? I don't remember very many of these historical events. But, when I have a fleeting memory, you can be sure I'll post it. :-)

I do, however, remember a Jefferson Starship concert in the park in the 1970s, which was rained-shortened, too. And I remember it because I was there, covered in mud. I don't, however, remember any songs they did. My major visual image from that concert was going with a few friends after to a Schrafft's and wiping mud from our bodies in the bathroom and ordering food. There were a lot of mirrors in the restaurant, and we looked terrible.

I was there. Spent the day with two friends watching all her movies on big screen at the park, ate a picnic lunch, then she came on and within seconds we looked behind us and the clouds were the darkest I'd ever seen.

On the way out of the park one of my friends got her purse nabbed by a kid, she followed him through the crowd and beat the hell outta him and took her purse back. We finally made it, in the rain, to the 72nd St. exit out of the park and took the subway to Penn Station and then home to Long Island where we threw everyone's clothes in the dryer and sat around in robes laughing about how Barb beat that kid down and got her purse back.

i rememember sitting anxiously in front of the t.v! But made it back the next day...it all ended too soon for me! Can't wait to get the dvd!

I was at the Jefferson Starship concert when it rained on and off. It was July 7, 1976. The band risked their lives to try and give us a show. Here is the set list:

It was a wild time in NYC! Glad I lived to tell.

Or maybe that was a different show, looks like the setlist tho...

I'm not aware of Diana Ross performing a free concert in Central Park in 1975. And you mention a set list, but there wasn't one mentioned in the post.