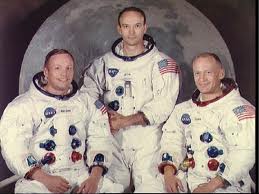 The morning of Apollo 11's lift-off on Wednesday, July 16, 1969 was bright and sunny in Pittsburgh.  My dad was on vacation that week and we went for haircuts in the morning and were back in time to see the rocket blast-off from Cape Kennedy at around 9:30.  By contrast, the weather on the day of the Moon landing four days later, a Sunday, was overcast and a bit showery. 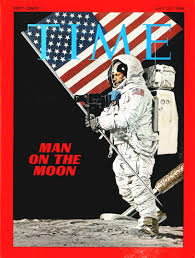 It seemed that life was put on hold as most everyone was following the TV coverage of the lunar module's approach to the surface of the Moon.  (And since this was in the days before cable TV there was no counter-programming to switch to.)  The afternoon's baseball games kept fans apprised of the mission's progress.  I alternated my time between playing kickball out on the street and sitting in the living room sorting through my baseball card collection while listening for updates.  The anticipation was unlike any I had ever experienced - perhaps with the exception of waiting for the arrival of Santa Claus. 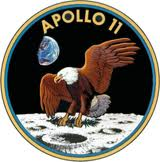 The lunar module settled on the Moon’s surface late in the afternoon at 4:17 ("Houston, the Eagle has landed"). Finally, at around 11PM, we watched the fuzzy black/white TV transmission as Neil Armstrong descended the Eagle's ladder and took his, and mankind's, first step on the moon.  A short time later he was joined by fellow astronaut Buzz Aldrin (the quintessential astronaut name) and together they planted the American flag into the lunar soil (further immortalized by an MTV promo 12 years later).  It looked like they were having fun as they sort of skipped and bounced around due to the Moon's lack of gravity.  This was a truly an awe-inspiring occasion that was a bit difficult for my 12-year-old brain to fully grasp. 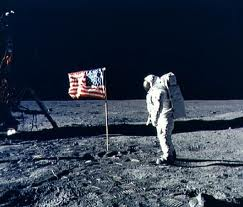 Many years later (in 2003) while vacationing in Iceland our tour bus drove through the barren central part of the island and my friend Tom and I remarked how it could pass for a moonscape.  Then our tour guide told us that, in fact, NASA had trained there for some of its Moon missions because of the similarity in landscape. 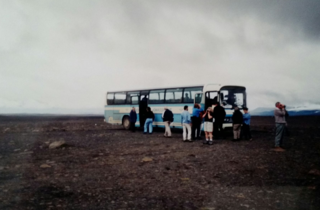 If your interest has been piqued, two worthwhile books that commemorated the 40th anniversary are One Giant Leap: Apollo 11 Remembered and  The Apollo 11 Moon Landing: 40th Anniversary. 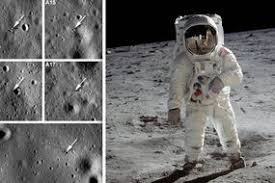 Forty years ago, I watched the moon landing sitting on a sofa with a cousin of mine. I was 19 at the time and the broadcast was analog and via antenna, not cable. And now I find myself, in the same room, on the same sofa (without my cousin), watching the review of this memorable event with a far clearer broadcast via cable. That makes me 49 years old and the sofa older than that but, the memory still fresh as if it happened yesterday.