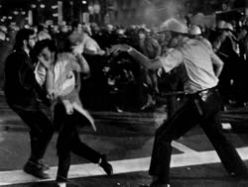 My parents and I had spent Aug. 28, 1968 in the town of Slippery Rock, PA (50 miles north of Pittsburgh) to visit my brother Darrell who was at band camp.  Back home that Wednesday evening, the TV was tuned to the Democratic National Convention, forever remembered for that night's fierce confrontations outside the convention hall between anti-war demonstrators and the Chicago police and the Illinois national guard.  Opposing points of view over US involvement in the Vietnam had finally come to a boil.  I remember seeing the TV coverage as I walked in an out of the living room throughout the evening.  (Pictured below is a young Dan Rather being roughed up on the convention floor.)  I was also adjusting to my first pair of glasses which I had gotten a few days earlier in preparation for the beginning of 6th Grade. (So was able to clearly see the baton-wielding police from a distance without squinting.) 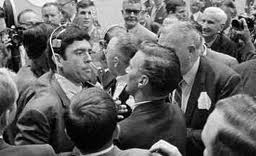 Fast forward to 2013 where the TV drama Mad Men used televised coverage of the police brutality against demonstrators at the '68 convention as a backdrop for one of its episodes during Season Six.  Joan and Meagan are deeply disturbed by what they are seeing on TV while at a restaurant Don, Roger and their GM clients debate the intentions of the anti-war demonstrators who they conflate with draft dodgers. 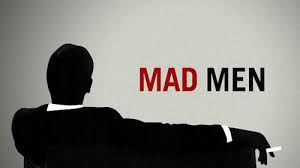 Throughout the turmoil of the late 1960s my parents did a good job of not transmitting their worries to me or my older siblings.  How they reacted to what they saw on TV tonight was no exception.  (I'm sure they had growing concerns over the Vietnam War since my brother was in high school and in a few years would become eligible for the draft.)  Sure, I was aware that "stuff" was going on, but never felt alarm or realized how serious it was.  It was just background noise and it wasn't until I was in college that I realized how serious the clashes were at the convention (inside and outside) and how strained the nation was over the war as well as with other social issues.

If you're interested in gaining a more in-depth knowledge of the combustible elements that made for such a tumultuous convention, you may want to consider reading David Farber's paperback Chicago '68.