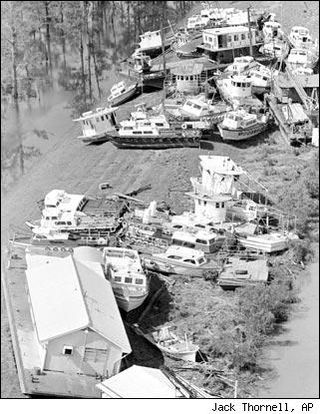 The reason I was aware of Woodstock was because of Hurricane Camille.  I had become interested in meteorology a year earlier while doing a 5th Grade science project so I was eagerly following reports about the hurricane.  As I watched Sunday's evening news with rapt attention (no 24/7 coverage on The Weather Channel back in those ancient times) I was made aware of an outdoor music event on a farm south of Woodstock in New York state that had begun on Aug. 15, 1969.  Meanwhile Camille was generating considerable interest because of how ferocious it had become as it approached Mississippi's Gulf Coast.  Indeed, when it made landfall late on Aug. 17 it was one of the most intense hurricanes to ever strike the U.S.  The number of deaths it caused (256) wouldn't be topped until Katrina killed an estimated 1,200 persons in 2005.  Interestingly, veteran WNBC-NY news anchor Chuck Scarborough was a young local anchor in Biloxi, Mississippi back then.) 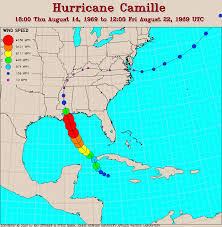 Camille's approach was very exciting for me, but Woodstock not so much.  I was a bit too young (12 years old) to be enamored with "hippie rock" nor had I yet to develop any musical preferences (that would have to wait until Captain & Tennille came on the scene).  Woodstock was more of an event for my sister and brother who were 18 and 16 at the time.  My recollection was seeing aerial photos of the traffic jam leading out of the festival and naked concert goers covered in mud.  For me Woodstock was just another news story that evening - along with the Tate/LaBianca (aka Manson) murders in L.A. that occurred the previous week.  Camille was the main event (as it probably was for much of the nation at the time). 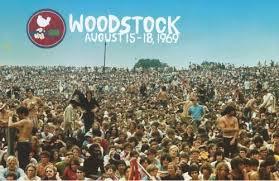 Both events have had numerous books written about them. Three to consider are Category 5: The Story of Camille; Roar of the Heavens; and Woodstock Revisited: 50 Groovy, Peace-Loving, Flashback-Inducing Stories from Those Who Were There.

What I have found interesting about Woodstock is the "tone" of the language that the press has taken today to describe this event as compared to way it was reported in 1969. In 1969, language such as "radical youth of the day" and the use of illegal drugs was at the front of each report. But today, it is mostly shown as a historical event and the language is far more gentle and informative about this event. I wanted to attend, but I simply did not have the money to do so.

Regarding hurricane Camille, it actually affected the weather in Kansas City. For about two days, we had a thin to medium overcast of clouds for two days and virtually no wind blowing. I would estimate that Kansas City is about 900 miles from the Gulf Coast. Weather forecasters for once correctly predicted the weather for those two days. Tim.

As you experienced in KC, areas that are hundreds of miles away from a hurricane often experience beautiful/tranquil weather because all of the moisture is being sucked into the hurricane.

I experienced hurricane Camille at a personal level. I was living just 20 miles east of the eye landfall,at 28ft above sea level near the runway. Peak surge level was 20ft. Thank God I was living in a concrete building on Keesler AFB in Biloxi MS. Some imprinted images are trying to push open a south facing door by 4 people, NO WAY or looking out a south facing window made my eyes water and seeing purple and green lightening. Feeling the building vibrating and the many window blinds crashing and banging. It was quite unsettling. Off base a married friend had to swim to a tree with the wife but made it. Hearing of a homeless man tying himself to a light pole with a rope just so he could fly in the wind.They found a pulp on a rope the next morning. Heard of the Hurricane party at the beach Hotel where 200 vanished. Base wind gauge broke away at 205MPH. We moved all bunk beds to the main hallway. I fell asleep listening to a radio to a very weak signal from WWL New Orleans 90 miles to the west. Next morning the sky was deep blue and cool temps. We had the only running water for 200 miles.
I recorded sounds of the day on audio cassette and I have transferred it to my computer. It will be uploaded as a video of pictures and the audio to You Tube at http://www.youtube.com/user/beefourme my own channel

Stephen, thanks for your thorough first-person account - and for the You Tube links. Ive never exerienced a full fledgedhurricane (Gloria skirted by NYC in 1985) but I can imagine the temptation must be great not to evacuate when a storm approaches because of the inconvenience and skepticism about the danger of the storm. By the way, one of our longtime anchormen here in New York, Chuck Scarborough, was starting out as a news reporter in Mississippiwhen Camille struck.

I just saw this convo albeit years later but I wanted share. I was a young girl in Mississippi during Camille. My father was in the Air Force but we had a home off base. Being in the Air Force we were allowed shelter on base in the pilot training classrooms. These were built partially under ground for sound proofing during their studies ( aircraft noise). The national guard were out directing us through the flooded roads The water level was at the window of my fathers chevy station wagon in some areas as we traveled to the shelter the wind and rain whipping about as those brave national guards worked . Emerging a day or two later we traveled back to our home it was still standing, wet as all the windows and doors had been opened,but none the worse for wear. sights we saw were unreal. Boats in trees. Bloated dead livestock. The strawberry farm where I picked
berries devastated. Friends homes filled with mud. Chicken feather in a tree like a dagger was a memory not forgotten. Along with our neighbors new Sears metal shed still
standing but devoid of all its paint. I am do remember the roar even in those submersed
buildings. One does not forget such experiences

but devoid of all its paint.