Previous posts I've written about Hurricanes Agnes, Gloria and Sandy have generated some of this blog's highest readership.  And although I have memories of other hurricanes, they aren't rich enough to turn them into full-blown posts.  Instead, I've written a few sentences about ten of them and put them all in this one post.

I experienced this hurricane but didn't realize it until nearly 40 years later when I was doing research for my weather blog (New York City Weather Archive).  On this day in 1976 my older brother and I drove from Pittsburgh to northern New Jersey for a vacation (which included my first time in the Atlantic Ocean, at Belmar, and my first visit to NYC), and when we got onto the NJ Turnpike we were met by sheets of heavy rain.  This was before The Weather Channel, so we were completely oblivious to the fact that hurricane Belle was bearing down on Long Island at the time (it made landfall there shortly after midnight).  It wasn't a strong hurricane, but memorable nonetheless.

This category 3 hurricane struck Galveston and Houston the day before I left for vacation in Provincetown.  I was supposed to go with my boyfriend Rick but we had hit a rough patch (just a few months after moving in together) so I went there alone.  I overslept by two hours and barely made my flight (on the now defunct People's Express). 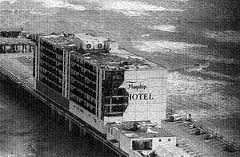 Hurricane Gilbert was the most intense hurricane to ever enter the Gulf of Mexico and it devastated Jamaica and Cancun, but spared Texas (after earlier dire predictions).  It coincided with my first time on jury duty.  I was picked for a burglary case (that occurred on the Upper Eastside) and we ended up being sequestered for one night.  Fortunately, I shared the motel room (near the Lincoln Tunnel) with a friend of my roommate.  During the same week my boss resigned.  (By the way, we, the jury, found the defendant guilty.)

I stayed up into the wee hours on a Thursday night watching coverage on The Weather Channel as Hugo made landfall in Charleston, South Carolina.  It was the strongest hurricane (category 4) to strike the Southeast in 35 years.  The NYC area was under a tropical storm watch with 5-10" of rain predicted, but after Hugo made landfall he changed course and we weren't impacted (which was a relief since four inches of rain had fallen a few days earlier).  A cousin in Charlotte, NC got married that weekend and had to contend with no power and downed trees after Hugo roared through.  Also on this day Irving Berlin died at the age of 101 (he wasn't a hurricane casualty). 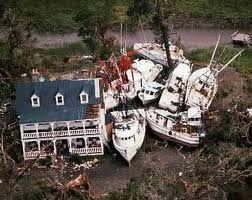 Like Hurricane Gloria six years earlier, Bob stayed to our east, but we still got a good deal of rain which was mostly over by noon on that Monday.  My roommate Todd was on vacation out in Montauk and went without power for a few days.  And my friend Tom was vacationing in Provincetown and had to contend with some inconveniences as well.  He recalls a number of drag queens walking around town with signs that said "I got blown by Bob".  I was relieved the storm was a quick mover because I had tickets for the Broadway show Grand Hotel that evening.  (Yes, that's The Weather Channel's one and only Jim Cantore - when he still had hair!) 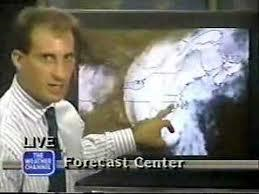 It may be hard to believe, but nothing memorable was going on in my life at the time.   Ironically, the National Hurricane Center in Miami was largely destroyed by Andrew as was the ad agency that had the Burger King account.  It was amazing how few were killed by this incredibly powerful storm (at one point there were rumors that hundreds of migrant farm workers had died). 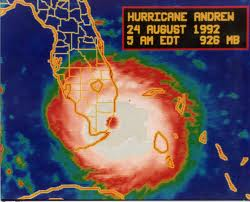 As Opal approached the Florida panhandle it strengthened just before landfall and became the second most damaging hurricane to strike Florida (after Andrew).  However, this story was almost completely lost to the coverage of the not-gulty verdict in the OJ Simpson trial the day before.  And the pope arrived for his second visit to the New York area.

For a brief time Edouard caused concern in NYC and on Long Island.  It was Labor Day weekend and I was out at Fire Island (it was my first summer in the Pines) when word spread on Saturday that Edouard might strike and evacuations might begin that night.  Fortunately, the storm took a turn to the northeast and no evacuations were needed.  One other memory from that weekend - while cleaning the table after Sunday dinner a housemate's guest asked me if anyone had ever mentioned that I looked like "Smithers" from The Simpsons.

Powerful Floyd's approach resulted in the evacuation of 2.6 million residents between Florida and North Carolina.  After striking North Carolina earlier in the morning he quickly moved towards NYC.  Downgraded to a tropical storm by the time it reached us, Floyd was still a huge rainmaker - five inches fell, the greatest one-day total in more than 20 years (even greater amounts flooded Philadelphia and Newark).  For a while many subway lines were shut down for much of the afternoon because of track flooding and some downed trees.  My office at ad agency Foote, Cone & Belding closed at 1:00 (Macy's too) but I stayed until 5:45.  When I got home I intended to go to the gym but it was so windy and rainy that I turned back after walking one block.

I was visiting my mother in Pittsburgh for the weekend when Katrina made its initial landfall in south Florida and then struck Louisiana and Mississippi on the day I returned to NYC (Sunday).  At one point on Sunday it was a category 5 with winds of 175 mph - incredible.  At first some meteorologists on The Weather Channel talked of how New Orleans had "dodged a bullet" when Katrina veered east and instead struck the Mississippi Gulf Coast head-on.

However, after the storm moved on the levees surrounding the city broke - and the rest is history.  The number of deaths was shocking (more than 1,800), especially since stronger hurricanes such as Andrew and Hugo caused fewer than 100 fatalities.  It took months before the final tally was determined.  It was also, by far, the most damaging natural disaster in U.S. history ($100 billion+). 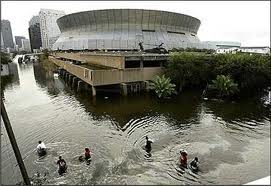 I watched TWC's coverage during the wee hours of Saturday morning as it struck Galveston and Houston (25 years after Alicia).  One of its reporters, Mike Bettes, got knocked around by the high winds even though he was in a somewhat protected hotel entranceway.  Later that night I watched SNL's 1st episode of the new season and it opened with Tina Fey's portrayal of Sarah Palin.  Two days later the financial markets were rocked by Lehman Bros. filing Chapter 11, followed on the same day by word that Merrill Lynch had been purchased by Bank of America to avoid Lehman's fate.

If you'd like to immerse yourself further in hurricanes two books to consider are Hurricanes of the Gulf of Mexico and Florida's Hurricane History.