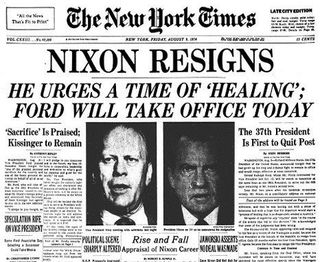 I was a teenager at the time of Richard Nixon's resignation and had yet to develop much in the way of a political consciousness.  Sure, I knew my parents were registered Democrats but I didn't really have an opinion about President Nixon (although I had some initial misgivings when he was first elected because the scuttlebutt on the playground was that he was going to institute Saturday classes).  And although the televised Watergate hearings had been a constant presence, and part of the background "noise" at home during the preceding 12 months, I watched tonight's presidential with no feelings of triumph or vindication.  Rather, it was a somber occasion and I thought how lamentable it was that Nixon had let his presidency unravel.  (For background on the Watergate affair you may find Carl Bernstein & Bob Woodward's acclaimed book The Final Days helpful; or perhaps the Oscar-nominated film from 2008 Frost Nixon.)

It was just me and my mother watching; Dad was outside puttering in the garden.  And although I knew I was witnessing an event unmatched by few others in U.S. history, I had other pressing concerns on my mind.  I was editor of the yearbook and had plans to make as my senior year in high school approached. (I also hoped that Nixon's resignation wouldn't cast a pall on the upcoming school year.) 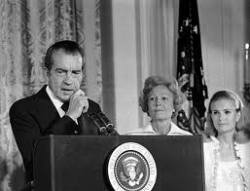 Speaking of the yearbook, I had just returned the day before from a workshop for yearbook staffs from high schools throughout Western Pennsylvania.  It was held over the course of three days at Seven Springs ski resort, about 50 miles east of Pittsburgh.  My ascension to the post of editor (at Sto-Rox High School) was a bit unconventional because I hadn't been part of the yearbook clique.  A new yearbook advisor decided to select the editor based on who wrote the best essay - and I was chosen. 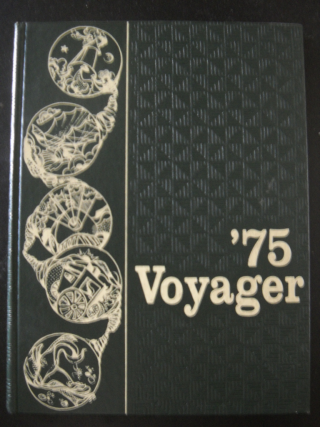 The next morning, a Friday, I watched as Nixon and Pat Nixon, now private citizens, left the White House and boarded a helicopter for San Clemente, CA.  Newly sworn-in president Gerald Ford and the new First Lady Betty Ford saw them off.  However, I was preoccupied with my morning paper route (I delivered the Pittsburgh Post-Gazette) because I had one paper left and I didn't know who I had missed.

My interest in politics would begin in earnest two years later when Jimmy Carter ran against Ford and I voted in my first presidential election.