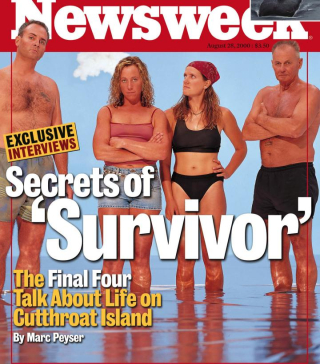 Although I only occasionally watched the first season of CBS's Survivor, I was familiar with its contestants from "water cooler" conversations with colleagues at work, from what I read in Entertainment Weekly as well as a few amusing websites that dissected each episode ("TV Without Pity" was one of them).  The final four contestants were even featured on the cover of Newsweek.  This summer replacement series was wildly popular and regularly delivered an audience in the neighborhood of 25 million.  My contribution to the building excitement was coordinating a "guess the final rating" contest in my office at ad agency Foote, Cone & Belding.

I didn't get to see the final episode on Aug. 23, 2000 because I had tickets that evening to see The Music Man on Broadway.  However, after the performance my date and I read on the electronic ticker in Times Square that the $1 million winner was gay nudist Richard Hatch, who had prevailed over Kelly Wigglesworth.  In a classic moment from that episode, here is contestant Sue Hawk's "Snake & Rat" speech in which she coldly explains her vote for Hatch:

The telecast delivered a huge audience, especially for summertime, with nearly 60 million watching some portion of it (28.6 household rating/45 share).  This gigantic audience brought back memories of the final episode of The Fugitive which also aired in August (8/29) in 1967.  It had a 45.9 household rating, which was the highest rating for a TV series until the "Who Shot J.R.?" episode of Dallas in November 1980.  I remember it being on but it was my brother and sister who were giving the episode their undivided attention.  Although I was in the living room, as a 10-year old it was more or less background noise.

(If you have a yen to relive and own Season 1 of Survivor, click here.)