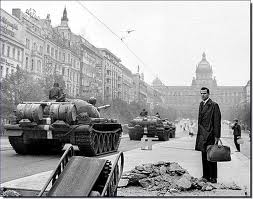 When the Soviet Union put an end to Czechoslovakia's "experiment" with democracy ("The Prague Spring") late in the summer of 1968, it hit close to home because my maternal grandmother was from Slovakia, the eastern region of Czechoslovakia.  She came to the U.S. in August of 1920 shortly after the independent nation of Czechoslovakia was created out of the dismantled Austro-Hungarian empire.  By coincidence the day the Soviet army rolled into Prague occurred the day before her 69th birthday on Aug 22.

I heard this dispiriting news during the afternoon as I was lazily lying on the living room floor reading the comics in the Pittsburgh Press and waiting for my dad to come home from work (around 4:30).  A TV news bulletin came on reporting what was happening in Czechoslovakia.  Although I was just 11 at the time I knew that restricting one's freedom wasn't a good thing (e.g., like not being allowed to watch TV or go outside to play) so I understood the seriousness of the situation there.  Mom called grandma to tell her the news.  It was yet another week of turmoil that was par for the course in turbulent 1968.  And the Democratic convention in Chicago, which would be held next week, would be the icing on the cake.

The acclaimed novel, Milan Kundera's The Unbearable Lightness of Being, uses the Prague Spring as the backdrop for the intertwined and tempestuous relationships of two couples.  It was published in 1984 and was later made into a movie in 1988 starring Daniel Day Lewis and Juliette Binoche.

(By the way, my grandmother lived to see Czechoslovakia divided into two independent nations in 1993 when she was 93.)

Rob...That's awesome about your grandmother outliving the Communists. But summer of '68 will forever be known for something else we won't see again without radical change: Bob Gibson's 1.12 ERA.