At one point earlier in the week Hurricane Gloria was a formidable category 4 storm with winds approaching 145 mph.  However, by the time it made its way up to the Mid-Atlantic region (after making an initial landfall in North Carolina) it had weakened somewhat, but was still a worry since hurricanes make so few landfalls in the New York metro area.  And although a hurricane warning had been issued for Manhattan at 4 PM on Thursday, it didn't keep me from attending a cocktail party that evening hosted by Travel & Leisure magazine to promote its jungle safari-themed November issue.  The event was held at The Safari Club, a few blocks north of Bloomingdale's.

For whatever reason, I wasn't feeling alarm over Gloria so when I arrived home I was surprised to hear on the news that the World Trade Center would be closed the next day as well as New York City schools.  Furthermore, residents of high-rise buildings were advised to tape their windows to keep glass from showering sidewalks below if they were blown in.  I didn't worry about that since I lived in a basement/garden apartment, but I had concerns about potential flooding. 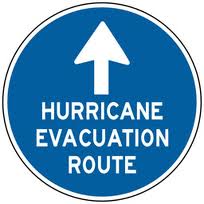 To get in the spirit I went to the supermarket and bought candles (not that there were any above-ground power lines in Manhattan to be blown down).  It was the first time I experienced panic-shopping and hoarding.  Since a hurricane was a novelty in these parts few of us knew what to expect as we turned in for the night.

On Friday morning (Sept. 27) I got a call from my boss at 8:00 telling me that the office (ad agency Young & Rubicam) was closed because of the storm.  However, not everyone got word and after coming in they were stranded when rail and subway tunnels were closed due to flooding.  I ventured out to pick up the paper and breakfast but I mostly wanted to experience the storm.  As I walked along Bleecker St. in the West Village I saw awnings tested mightily by the rain-blown gales and a few trash cans blowing down the street.

Manhattan was spared hurricane-force winds as the storm stayed to our east.  Gloria's "eye" moved over the Nassau/Suffolk county line (50 miles east of Manhattan), with Suffolk Co. bearing the brunt of the storm.  My friend Nina was impacted because she lived in a beachfront condo in Long Beach.  Another friend, Marina, had just moved to Southampton in Suffolk Co. and her yard suffered extensive tree damage and power was out for more than a week.  And out on Fire Island, Calvin Klein's oceanfront home in the community of the Pines lost part of its roof which landed in the swimming pool of the property behind it. 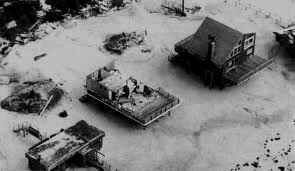 More than three inches of rain fell in Central Park that morning but skies cleared rapidly early in the afternoon. (This was much needed rain as New York was in the midst of a serious drought.)  I went out for a jog to survey the damage, which was minimal.  All I came across was a small tree blown down in the plaza of the World Trade Center.  The storm was a quick mover so it spared us from more wind damage or flooding.  I was relieved that disruptions were minimal because I had a date that night.

For a fascinating first-hand account of what it was like to experience Gloria out on Fire Island, you may want to read John Jiler's book Dark Wind: A True Account of Hurricane Gloria's Assault on Fire Island.

I remember going to work at Ted Bates (in what's now the "MTV Building" in Times Square) and being sent home by the Media Director even though I was willing to sign a waiver a liability. Why was I so anxious to be in the office when everyone else was enjoying a spontaneous holiday? I had a Client presentation to prepare for and "telecommuting" was a totally unknown concept.

I believe I was working on the trading desk @ Cowen (sp?) & Co. in the financial district @ the time. As usual, I commuted to the city from Roselle, NJ on NJ Transit & PATH into the WTC. Only after I arrived was I told to go home. The office would be closing. Other than the city being very windy, nothing too much was happening. After returning home, it puzzled me how everything shut down for a relatively uneventful day. I was somewhat disappointed. Perhaps because I share genes with my weather geek brother. :)

I remember Hurricane Gloria because it was the first time I worked from home. I could not get to my news office because power lines were down on several streets around my apartment in Morris Plains. I called my boss at her house. She couldn't get to the office either so I spent the day calling sources and doing interviews over the phone. I remember it was creepy being isolated, not being able to go anywhere. Luckily, I had power but my neighbors down the street had no electric until late that night.