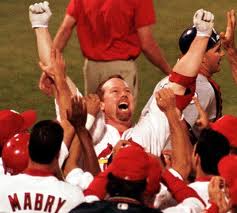 It was Tuesday evening, September 8, 1998, and I turned on the game between the Cubs and Cardinals in hopes of seeing Mark McGwire break Roger Maris' record for most home runs in a season. Since his home run chase had been so widely followed the game aired on a broadcast network, Fox, which was highly unusual for a regular season game in primetime.  After he failed to do so in his first at-bat I decided to go to the gym. 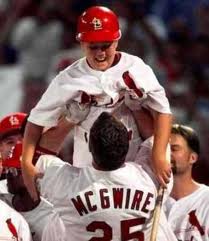 Although my gym (Crunch Fitness) had TV monitors I missed seeing McGwire launch his historic 62nd home run because I was in the middle of doing a set of pulldowns, so my back was to the screens.  When I turned to look after completing my set I saw McGwire rounding the bases and then watched some of the celebration including congratulations from his young son and fellow home run chaser Sammy Sosa of the Cubs.  It was a sweet moment. (The YouTube video of the HR is no longer available.)

Looking back at it now, with all we know about the charges that McGuire, Sosa (as well as A-Rod, Big Papi and Manny Ramirez among others) were taking performance enhancing substances, this milestone leaves a bitter taste.  A supposed moment of triumph instead somewhat resembles the foolishness of President Bush's "Mission Accomplished" moment five years later a few months after the U.S. incursion into Iraq began.

Three years later, on October 5, 2001, I also missed seeing Barry Bonds break McGwire’s record.  I happened to switch to ESPN close to 11PM (the game was being played in San Francisco) just as Bonds was rounding the bases in the 1st inning.  However, compared to McGwire's pursuit of the record, I had less interest in following it this time around since I was hardly a fan of Bonds.  Also, since it came just a few weeks after 9/11 it seemed somewhat trivial. 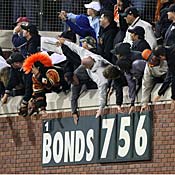 And six years later when Bonds broke Hank Aaron’s all-time record for career home runs (Aug. 7, 2007) I was vacationing out at Fire Island and read the news about it online.  I was happy Bonds' joyless pursuit was finally behind us and delighted that once the media attention ended he more or less disappeared from public view. (Game of Shadows: Barry Bonds, BALCO and the Steroids Scandal does a good job of revealing the underlying reasons behind the Bonds controversy.) 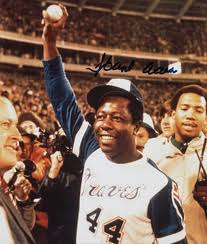 Happily, I did see Hank Aaron hit the home run that moved him ahead of Babe Ruth (April 8, 1974).  I was a junior in high school and had taken a time-out from studying for the SATs to watch the game.  After Aaron eclipsed Ruth's record with HR #714 in the bottom of the 4th inning I resumed studying.  It seems fitting that this is the milestone I witnessed since his achievement appears to have been the only legitimate one of the three players since he wasn’t hopped up on performance enhancing drugs.  (For more on Aaron's pursuit you may find the book Hank Aaron & the Home Run That Changed America of interest.)

I believe I saw all 3 HR "events" you speak of, on TV of course. However, what is more memorable to me about this era is a game my wife, Maureen, son, Nick, and I saw during one of our annual road trips, in July of 2001. We went to a game, at which St. Louis visited the Cubs at Wrigley Field in Chicago. Although a couple of hundred miles from each other, this was like a healthy hometown rivalry. It was a beautiful afternoon. The fans were there for a spirited contest. Although, being visitors, we had no strong sympathies for either team, (but Nick was not a McGwire fan), we enjoyed the game nonetheless. Mark McGwire was still accumulating total HRs and his rival Sammy Sosa was also playing. As expected, they both hit quite a few out-of-the-park during batting practice. Although we had great seats at field level on the third base side, when McGwire came to bat in the 7th I decided to sneak behind home plate to see if I could snap a close-up photo of him at bat. He had already hit a HR in the 4th. To my surprise, as I randomly shot, McGwire hit No. 570 out of the park. When I later had the film developed (this was prior to my conversion to digital) I was amazed to see I had captured the ball, in mid air, just as it had left his bat; a great serendepitous photo. I've often considered sending him a copy, c/o the Cardinals, to see if he would sign it. I've even had it enlarged to 5x10. However, recent developments have prevented me from doing so. Hindsight hasn't dampened my memory of that game's healthy atmosphere. Ignorance of what was beneath McGwire, Sosa and Bond's power certainly was bliss.

Mark McGwire was and has been one of the best baseball players I have seen in my entire life and needless to say that I was such a great fan of him and it was awesome to sit and watch him hitting the ball, no words to describe that feeling!