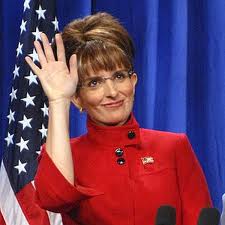 I hadn't planned on watching the kickoff of Saturday Night Live's 2008-09 season on Sept. 13 because I didn't expect Olympic swimming champion Michael Phelps would be worth watching as guest host.  However, since I had just finished watching the 11:00 news I figured I'd hang around to see how SNL would begin.  And I was rewarded big time as it opened with a joint address by Hillary Clinton and Sarah Palin.  Amy Poehler had been impersonating Hillary for well over a year and her portrayal was hilarious as usual.  However, I was mesmerized and delighted by Tina Fey's portrayal of Palin - she resembled the Alaskan governor/Republican VP nominee to a remarkable degree.  (This episode delivered SNL's highest rating in seven years.) 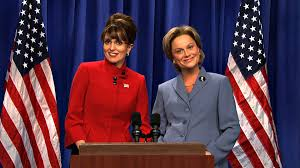 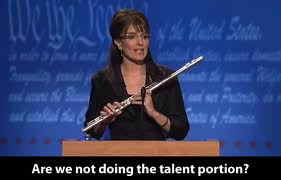 It was this skit that acquainted me with NBC.com.  As the weeks went by I'd go onto the website and watch it repeatedly (as well as other Palin skits that aired in the next two months).  I'd find myself replaying the lines in my head when I was in the shower, at the gym or on the subway.  It gave me such pleasure.  However, I couldn't fully enjoy the hilarity of these skits because I worried somewhat that the publicity they generated might actually benefit Palin, especially since, in my mind, Fey's portrayal made her seem benign - and almost likable.  Furthermore, I feared that these skits would be bittersweet if the McCain/Palin ticket prevailed over Obama/Biden in the election - similar to how the constant jokes about Bush/Cheney weren't so hilarious to me because, at the end of the day, they were still in office - and that wasn't funny at all.  Happily, my fears were unfounded and I now laugh with utter abandon whenever I watch these golden SNL clips.

I saw this one very funny :D