It was a particularly pleasant evening in Western Pennsylvania when USAir Flight 427 from Chicago crashed minutes before it was to land at Pittsburgh's new airport (it opened two years earlier).  All 132 passengers and crew on board were killed, making it the deadliest U.S. plane crash in seven years.  It was also the first air disaster to occur in Pittsburgh.  I heard the news shortly after I arrived home from work from my job at New York ad agency NWAyer. 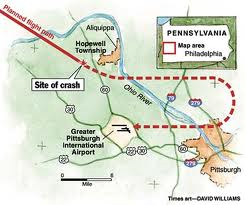 Although every deadly plane crash is distressing, what made this one particularly troubling for me was the fact that Pittsburgh is my hometown.  (I tried to reach my mother that night but the phone lines were tied up for well over an hour.)  The field where Flight 427 crashed was in Hopewell Township, where my godparents lived.  I'd flown USAir numerous times to visit my parents - and I'd be flying there a few weeks later to visit my mother.  (She lives in the town of McKees Rocks, 20 mies south of the airport.)  What was also sobering was the fact that Flight 471 crashed in good weather with no warning of trouble.  It would be five years before the FAA determined the exact cause of the crash.  And although I try not to, it's difficult for me not to think about that every time I fly to Pittsburgh in good weather. 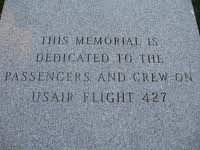