Marveling at History Through the Covers of TIME Magazine
The Pirates' Bill Mazeroski Hits a World Series Home Run for the Ages (October 13, 1960)

Oct. 11, 1991 was a Friday, and that afternoon I was sitting in my office at ad agency NWAyer when I heard on the radio news of the rather contentious confirmation hearings for Supreme Court nominee Clarence Thomas.  Anita Hill, a former colleague of Thomas', had made allegations about lewd comments he made and sexual harassment she had been subjected to when they worked together (he was her manager at the Equal Employment Opportunity Commission.)  Curious, I walked down the hall to the office of the director of national broadcast buying to watch some of the live testimony on his TV.

I was taken aback by Hill's frank testimony in front of the Senate Judiciary Committee, e.g., Thomas' comment about a pubic hair being on a can of Coke on his desk during a meeting with her (perhaps the most ignominious brand mentions of all time?).  Never before had words such as these, or for that matter, "penis" and "oral sex" been talked about so openly in a public forum.  (This was seven years before the references to the semen stain on Monica Lewinsky's blue dress.)

The riveting "he said/she said" testimony continued throughout the afternoon and into the evening (when Thomas got his chance at rebuttal).  In addition to watching some of it at the office I continued watching the coverage at home before and after I went to the gym and then after traveling out to New Jersey to spend the night at my boyfriend's apartment. 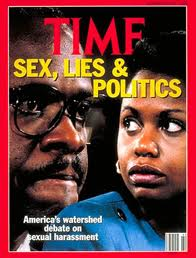 Four days later Thomas was approved in a very close vote in the Senate.  In fact, the 52-48 vote was the closest confirmation vote of the 20th century.  (By comparison, Elena Kagan was confirmed this summer by a 63-37 vote, Sonia Sotomayor by 68-31 and Chief Justice John Roberts by 78-22.)  The book The Prince & the Pauper: The Case Against Clarence Thomas provides an essay that offers background into Thomas, an analysis of his confirmation as well the political process that resulted in his selection. 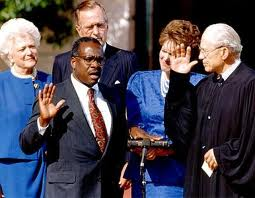 In 2018 this unpleasant skewering of Hill was brought to mind when another Supreme Court nominee, Brett Kavanaugh, was accused by Christine Blasey Ford of attempting to rape her in 1982 when they were teenagers in Maryland.