Carl Yastrzemski Leads Red Sox to World Series on Final Day of Season (October 1, 1967)
Marveling at History Through the Covers of TIME Magazine 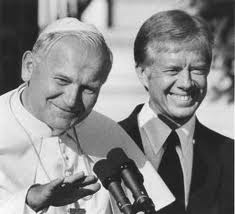 The world was wild about Pope John Paul II.  Less than a year into his papacy he made a triumphant visit to his Polish homeland in June and a few months later the U.S. got its turn when he spent the first week of October 1979 in the Northeast visiting Boston, New York, Philadelphia and D.C. (he was the first pope to visit the White House).  During his visit to New York I managed to see him twice.

Mys first sighting was during lunchtime on Tuesday, October 2 as I waited with three co-workers (the "3-M's": Marina, Maria & Marian) at the corner of First Ave./49th St.  We saw him drive past after he left the U.N., which was a short walk from our office on 3rd Ave./50th St. (ad agency Scali, McCabe, Sloves).

I saw him again the following morning and this time it was pure happenstance.  I was walking to work in a downpour when he came riding past in his "popemobile" down 5th Ave. on his way to Madison Square Garden after saying mass at St. Patrick's Cathedral (see video clip below).  Not a bad way to start the day I must say!  And it seemed that the good feeling generated by JP-II's visit extended to much of the nation (or, at least, among Roman Catholics) but the euphoria would last for just a month because on November 4 the U.S. embassy in Tehran was overtaken and 52 of its American staff were taken hostage.  This turn of events, combined with tough economic times (e.g., double-digit inflation), created a national malaise that would be instrumental in bringing down Jimmy Carter's presidency.