Post-Season Baseball: The Agony & the Ecstasy

A few weeks ago I wrote about ten hurricanes and the memories I associated with each of them.  In this post I've chosen to write of memories I connect with ten post-season baseball games over the past 45 years (not including the 1986 World Series, which I've written about in a previous post).

I was home from school (7th Grade) with a cold so I was able to watch the entire game.  I wasn't rooting for the Mets because, despite winning 100 games in the regular season, in my eyes their rise was a fluke.  (I felt the same when expansion teams like Florida, Arizona and Tampa Bay played in the World Series.)  And I certainly didn't think they'd be able to prevail over the mighty Orioles (who had won 109 games), but not only did the Mets do it - but in just five games.

It was a Sunday afternoon when the Pirates won a 2-1 nail-biter over the Orioles to win the World Series.  My mother and I waited for the game to end before we drove my grandmother home, honking the car horn the entire way.  (My dad, never a big Pirates fan watched the day's football games on our other TV.)  We also put a big "Bucs Fever" sign in the living room window.  Since I was too young to celebrate the Pirates' 1960 World Series victory over the Yankees this one was very sweet.  The '71 Series was the first to have a game played at night, a novelty that eventually became the norm by the mid-1980s. 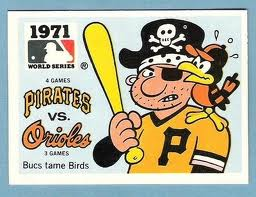 The game was still being played when I headed out to my weekly Junior Achievement meeting in downtown Pittsburgh, so I brought my transistor radio with me to listen to the closing innings.  As the bus I was riding approached the City on the Ft. Pitt Bridge I heard the Reds score the winning run in the bottom of the 9th inning on a wild pitch to advance to the World Series.  A similar crushing loss in the bottom of the 9th happened to the Pirates 20 years later when they lost Game 7 of the NL Championship Series to Atlanta.  (Then they went 21 years before their next winning season.) I had just come home from school and turned on the game.  As I was changing clothes Pete Rose and Mets shortstop Bud Harrelson got into a scuffle after Rose slid hard into Harrelson at 2nd base.  However, the Mets got the last laugh by advancing to the World Series.  Like 1969, I wasn't a Mets fan, especially since they barely had a winning record (82-79) and had passed my Pirates in the final week of the season to win the NL East.  Two big news events occurred during that post-season: 1) VP Spiro Agnew resigned due to tax problems and 2) Egypt attacked Israel on the eve of Yom Kippur during the weekend the World Series began. 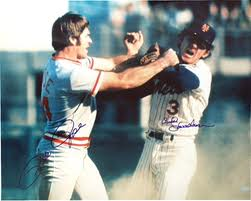 I was in my freshman year at Penn State and watched the game in a friend's dorm room when it went into extra innings, so I saw the Red Sox' Carlton Fisk hit his famous game-winning home run in the bottom of the 12th inning.  This game was such a good one that almost forgotten is the fact that Cincinnati won the next day to win the World Series. 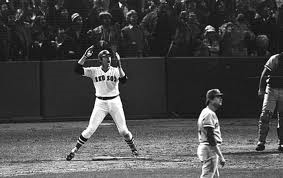 The Yankees had stormed back in August and September to tie the Red Sox for the AL East crown and played a one-game tie-breaker.   I watched the first seven innings in my dorm's TV room.  I left for dinner after seeing the Yankees' Bucky Dent (pictured with Reggie Jackson) hit his memorable 3-run homer over the Green Monster at Fenway to erase Boston's 2-0 lead.  The Yankees won the game and went to the World Series - which they won over the Dodgers for the second year in a row. 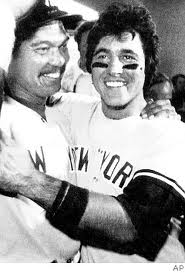 The "We Are Family" Pirates defeated the Orioles in a carbon copy of their 1971 World Series championship over them, i.e. after falling behind 3 games to 1, they swept the next three games.  But it was a bittersweet victory for me because I was living in northern New Jersey and there was no celebrating crowd.  I called my brother who lived down the street and then my parents back in Pittsburgh to share the good news. 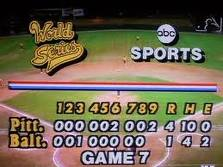 This World Series is forever known for the earthquake that struck minutes before Game 3 was about to start - and captured on live TV.  I had turned on the game about five minutes after the quake hit.  Since the Series involved two teams from the Bay Area it was delayed for 10 days.

As was my usual habit I went to the gym late after taking a nap (around 9:30).  The game was on one of the TV monitors above the treadmills and Stairmasters, and when I left it appeared the game was in hand with the Cubs leading 3-0 in the top of the 8th inning.  If they won they'd advance to the World Series and get a chance to break their 95-year streak without a World Series championship.  However, between the time I left and got back to my apartment, about 10 minutes, the game had turned around completely and the Marlins had taken an 8-3 lead!  It turned out that an overzealous fan (the infamous Steve Bartman) had leaned over and deflected a fly ball that the Cubs outfielder was about to catch.  After that the floodgates opened.  (This was was somewhat similar to what happened in the 1996 AL League Championship between the Orioles and Yankees when 12-year old Jeffrey Maier reached out to grab a fly ball hit by Derek Jeter that was about to be caught.  It was called a home run and the Yankees won the game because of it.) 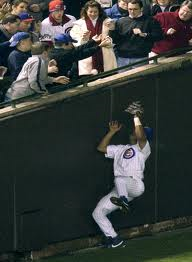 A novel experience was having someone to watch the games with as my boyfriend David was also a baseball fan.  However, we had different ways of enjoying the games.  For instance, David was more a student of pitching while I liked high-scoring games.  Furthermore, he found it peculiar that I often commented about the appearance of each player as they came to bat (which I thought was normal, especially for a gay man).  Lastly, I found it nerve wracking to sit through an entire game, especially if the Yankees had a lead, while David enjoyed watching the entire nine innings.  However, one thing we had in common was rooting for the Yankees, who beat the Phillies in six games. 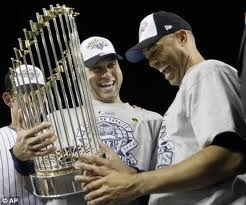