For the five years leading up to today Wall St. had been in the midst of a bull market.  However, after reaching its all-time high at the end of the summer the market began heading south.  Then on the afternoon of October 19, a Monday, a number of friends called me at work to report that Wall St. was experiencing a meltdown.  Stock prices had plunged and the market was forced to close early because the huge volume of selling was just too great for the trading floor to handle.

At the closing bell the Dow had plummeted 508 points, a decline of nearly 23% (this was on top of 235 points lost the previous week.)  This percent decline was nearly twice that of October 28, 1929 on the eve of the Great Depression. 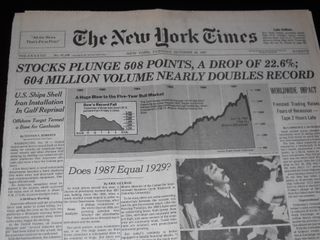 I was 30 years old at the time and had been kicking myself for not investing during this bull market (I didn't open my first mutual fund until the following year).  However, on the upside, since I didn't have much at stake I wasn't shaken like many of my older colleagues were.  My boyfriend at the time was very concerned as he was chief counsel at EF Hutton, a brokerage that had been under investigation for various financial improprieties.  Today's market collapse quickened its demise and in less than two months it merged with Shearson Lehman/American Express. (Happily, he kept his job.) 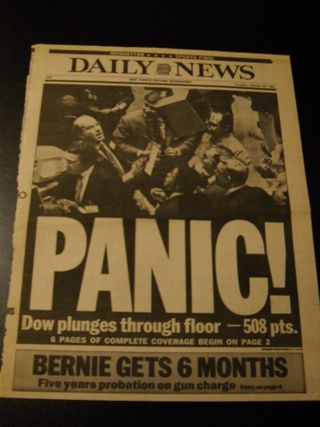 From work I went home and tuned to the CBS Evening News to try to grasp the enormity of it all.  Wondering how much further might this collapse go was cause for anxiety as Tuesday dawned.  Trading that day was characterized by wild swings, so much that the market closed for a brief time at mid-day in hopes of regaining its bearings.  Thankfully, the market rebounded in the afternoon and half of Monday's losses were regained in the next few trading days.  This rebound was in stark contrast to the Black Mondays of 1929 and 2008 which presaged the beginning of grim economic times.  By contrast, this turned out to be merely a market "correction".

Somewhat lost during that week in 1987's financial turmoil was the acrimonious confirmation hearings for President Bush's choice for the Supreme Court, Robert Bork.  At the end of the week the U.S. Senate would vote down his nomination by a 58-42 vote.

I was still very young when that Wall Street disaster happened. But I can still remember my dad panicking when he heard the news. Fast forward to 2011, I panicked myself when S&P downgraded the US credit rating. The stocks fell and bounced up, only to fall again and rise again in a vicious and unpredictable cycle. We held our breaths during that wild ride. Good thing the market stabilized a bit now.