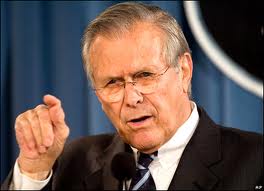 The morning of November 8, 2006 was dreary and rainy but I was in good spirits for two reasons.  First, the results from yesterday's mid-term elections were very positive as both houses of Congress returned to Democratic control.  Second, I was getting paid for a research project I had recently completed about the U.S. Hispanic market.  I went up to Chelsea at around noon to pick up my check from the research company I did the project for.  From there I walked over to my bank to deposit it and while standing in line at HSBC I heard the surprising news on CNN that irascible Secretary of Defense Donald Rumsfeld was stepping down. This news bulletin was like a beam of sunshine breaking through that day's clouds.  Even better was the fact that for some reason the president decided to wait until after the election to make this announcement.  Therefore, it was of no benefit to Republican candidates.  This news made the day's pouring rain (the most of any day this year, a record-setting 3.60") more than bearable.  In fact, as I walked home I felt lighthearted, just like Gene Kelly in his famous rain-splashing scene in the the movie Singin' in the Rain.  At long last there appeared to be light at the end of the tunnel - and in two more years we would be delivered from evil.