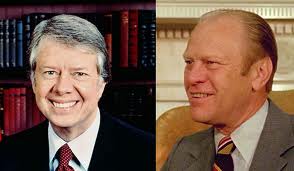 Since 1960 there have been four very close presidential elections*.  One of them - 1976's race between Jimmy Carter and Gerald Ford - happened to be the first I voted in (but I voted by absentee ballot since I was away at college at Penn State).  Ford was the incumbent, immortalized by Saturday Night Live's Chevy Chase for his clumsy (albeit congenial) nature.  Meanwhile Carter came out of nowhere (nowhere being Plains, Georgia) - trailblazing a path that future Democratic presidents Clinton and Obama would also take. 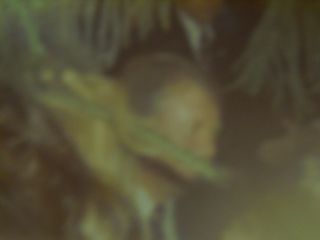 A month before the election Carter made a campaign stop at the Beaver Valley Mall which was adjacent to campus.  It was Saturday morning and a group of us walked there to see if we might catch a glimpse of him.  I got close enough to snap the photo to the right (as you can see, of poor quality), but a bit too close for the Secret Service agents when I ducked under some barricades.  I'm sure if it had been 30 years later I would have been tackled and 'cuffed rather than just pushed back.

The autumn of '76 was also memorable because I had my one - and only - girlfriend at that time (I came to the realization that I was gay the following summer).  And what sticks with me about this election was that Carrie was a Ford supporter.  This was hard for me to reconcile because I had the naive notion in my head that everyone in my circle of friends would have similar political leanings.  After all, how could someone I enjoyed being with have such a different view when it came to politics?  (I had a similar feeling when I joined Facebook and was taken aback by troubling political comments made by some of my "friends".)  It just so happened that ours was a short-lived relationship and this would be one of the final nails in the coffin.

On Election night I had sign-in duty at my dorm, a co-ed building in which girls lived on one side, guys on the other.  Members of the opposite sex were required to sign in to visit the "other side" after 8:00.  I heard election returns in piecemeal fashion and was in bed long before Carter was declared the winner at 3:30 AM (I had to be up early for my 8:00 philosophy class.)  His victory was delivered by Ohio, which he won by just 0.27% - beating Ford by 11,000 votes out of four million cast.  Of course, I was delighted - even more so because it gave me bragging rights over Carrie and her vexing choice.  (Post script: 33 years later Carrie and I became reacquainted on Facebook).

To read more about their respective presidencies two books to consider are The Presidency of James Earl Carter, Jr. and Gerald R. Ford.