ABC aired the chilling, and controversial, movie The Day After on the Sunday before Thanksgiving  in 1983.  It depicted a conflict between the U.S. and Soviet Union that escalated into nuclear war, and the consequences suffered by a family living in Lawrence, Kansas after a nuclear bomb was dropped nearby.  I watched it with my ex-boyfriend Rick at his apartment. (We had broken up a few months earlier but would reconcile and move back in together a week before Christmas.)  I have to admit it was weird watching a movie depicting Armageddon just as the holiday season was getting underway. 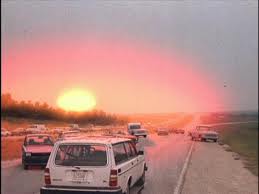 The movie (starring Jason Robards) had a grim storyline with no happy, or even hopeful, ending.  It was even more sobering because of real-life tensions that had been building between the U.S. and Soviet Union during the first Reagan administration.  Despite the fact that it was expected to attract a huge audience, the movie aired with limited commercials (and none after the missles were launched) as very few advertisers were willing to air in it.  This apprehension prevented ABC from charging high rates  for advertising time; therefore, the few advertisers who took advantage got extremely good deals.  One ad I remember seeing was for Orville Redenbacher microwave popcorn.  I thought the juxtaposition of a nuclear blast and corn popping was amusing in a black humor sort of way. 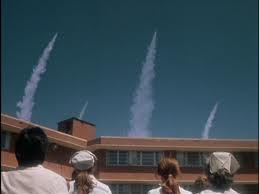 By the standards of today the special effects are quite cheesy and have a slap-dash look to them, but even today the five minutes showing the attack are sobering.  As expected, the movie delivered a huge 46 household rating/62 share, making it the highest rated TV movie of all time and 3rd highest rated program of the year (behind the final episode of M*A*S*H and the Super Bowl).  Soon afterwards a parade of TV movies with "socially relevant" storylines would follow, including Something About Amelia (incest); The Burning Bed (wife beating); and An Early Frost (AIDS).

Upon the movie's conclusion a special episode of Nightline aired to discuss the movie with a studio audience.  I had seen enough and didn't need to immerse myself further in the grim subject so I walked home in the rain to my apartment in Manhattan's East 20s.  After what I had watched tonight I was looking forward to spending time with my family back in Pittsburgh for the Thanksgiving holiday.

What is the nuclear war movie called that ends with a family taking drugs to die before radiation comes?
I am trying to find a movie that I watched awhile back, but can not remember the name. The movie has to do with the after effects of a nuclear war scenario. At the end of the movie a family takes some sort of drug to die so that they don't die from the radiation headed their way (i think they are in australia at the end of the movie). I watched it in various parts on youtube.

have you ever wondered why we havent had a nuclear war in over 30 years of warmongering? I believe highly evolved extra
terestials are protecting us. Call me a loon , I really dont care.

Does no one but me feel we need to put a stop to this international space station business? If we were to have a world wide or nuclear war who do you think is getting on that station? Certainly not me the average joe.The military would probably shoot me down for even getting close to the shuttle.The only ones that are getting up there in times of crisis are old crusty government fat cats.

buy viagra (by the way interesting name) a nuclear war movie I know that has a family taking drugs to die before getting radiation sickness, was On The Beach. There are two versions of this film. One made in 1959 I think starring Gregory Peck, Eva Gardner, Fred Estaire and Anthony Perkins. The remake was in 2000 starring Armand Assante, Rachel Ward and Bryan Brown. Basically nuclear war has led to a massive radiation storm in the northern hemisphere, and its spreading down to Australia, one of the few continents that still has civilization. As the radiation sickness hits, people are given cyanide capsules and injections to kill themselves quickly and painlessly. You can see most of On The Beach (2000) on YouTube.