In the early evening of Election Day, Nov. 7, 2000, I was running on the treadmill at the gym (Crunch Fitness) watching news coverage as I warmed up for my weight workout.  The early returns looked promising for Vice President Al Gore, the Democratic candidate (and my choice).  In fact, NBC had just projected him to be the winner in Florida.  This encouraging news gave me a lift during my workout.  However, by the time I returned home an hour later the state's 25 electoral votes had been taken from his column as Florida was now "too close to call".  This was quite an unusual development.

I stayed up until nearly 2 AM, and then for whatever reason I chose to keep the TV on as I slept.  (At least I was able to lull myself to sleep knowing that former First Lady Hillary Clinton had won her race in New York for the US Senate.)  I awoke to the same uncertainty as when I crawled into bed - the race had yet to be called.  And this is how it would stay for the next five weeks until the Supreme Court decided in Bush's favor - thus beginning an 8-year nightmare for the nation.  (Books by CNN legal analyst Jeffrey Toobin and renowned Harvard Law professor Alan Dershowitz discuss the standoff in Florida.) 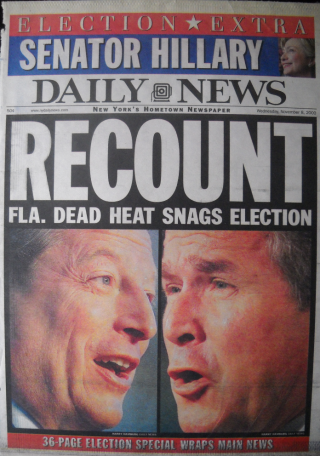 The craziness in Florida, with its confusing variety of ballots, caused me to reflect on how those in the advertising research field (my profession) so often disparage Nielsen for its measurement of TV audiences - using techniques which go through rigorous methodological review.  How curious that its methods are held up to such greater scrutiny compared to the jerry-rigged system used to elect the President - undoubtedly the most important individual in the world. 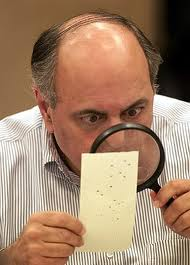