I was in my senior year at Penn State during the fall of 1978 and had just come home for term break on Nov. 18.  That evening our TV watching was interrupted by a news bulletin reporting that California congressman Leo Ryan and eight others (including an NBC cameraman and two newspaper reporters) were gunned down at an airstrip in the small South American nation of Guyana.  They were there on a fact-finding mission to investigate a cult known as the People's Temple whose members were mostly from California. 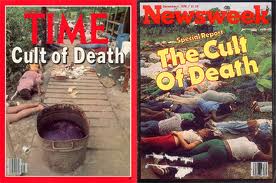 As bad as this news was an even grislier story unfolded the next day as the residents of Jonestown, the settlement Ryan was visiting, participated in a mass suicide ordered by their paranoid leader Jim Jones.  Although some had been shot most died after drinking a grape-flavored drink laced with cyanide.  The number of dead was truly staggering.  As the week went on the numbers rose steadily, 100 at first, then 250, 500 all the way up to a staggering final toll of 913.  Understandably, this tragedy cast a pall over the Thanksgiving holiday. (A number of books have been written about this event including Raven: The Untold Story of the Reverend Jim Jones & His People.)

One legacy of this tragedy is the phrase "drinking the grape Kool-Aid", which was coined to suggest that someone was brainwashed.

One legacy of this tragedy is the phrase "drinking the grape Kool-Aid", which was coined to suggest that someone has been brainwashed.