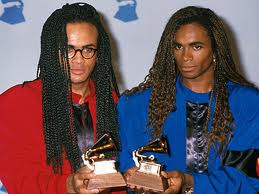 In mid-November 1990 I was away on a business trip in Los Angeles visiting my company's office there for the first time (ad agency NWAyer).  That evening, a Thursday, I was in my hotel room (the newly renovated Biltmore) getting ready to drive into West Hollywood for a bite to eat when I heard a breaking story on the evening news about Grammy-winning vocal duo Milli Vanilli (Best New Artist of 1990).  It was revealed that they hadn't done their own singing when recording or performing! 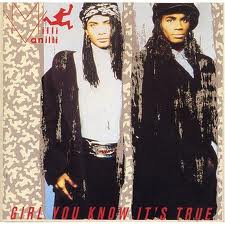 Despite this deception I couldn't understand why a class-action lawsuit was filed to obtain refunds for those who purchased MV's CD/record Girl You Know It's True (which sold nearly 10 million units and produced five top-5 singles).  After all, the wildly popular songs were unchanged, with the same great hooks and beats, so if fans previously liked hits such as Girl I'm Gonna Miss You why would they no longer enjoy them now?  Of course, MV had to give back their Grammy.  And unlike Vanessa Williams, whose career took off after a scandal (nude photos) forced her to step down as Miss America in 1984, the fledgling careers of Rob and Fab were largely over (and, sadly, Rob committed suicide in 1998).

The fascinating clip below shows them accepting their People's Choice, American Music and Grammy Awards.