I was in the 3rd grade and after dinner on the evening of November 9, 1965 I was doing homework in the living room with the radio playing in the background (my parents listened to the evening news on venerated Pittsburgh station KDKA while we ate dinner).  Mom and Dad were getting ready to leave for Parents' Night meetings at each of the schools my brother, sister and I attended.  That's when the news bulleltin came on about a massive power failure affecting New York City and the Northeast during evening rush hour. 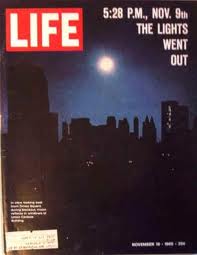 Years later (as a resident of NYC) I was on a date when the conversation turned to our tastes in music, in particular, the Supremes.  My date told me that whenever he heard their song I Hear A Symphony it brought back memories of the Blackout of '65.  The song was being played on radio station WABC the evening of the blackout when the melody and voices became distorted as the turntable slowly wound down after losing power.  And my second memory of this date was that when we said goodnight he hugged me so hard (it came out of nowhere) that he broke one of my ribs.  Literally, a painful memory.