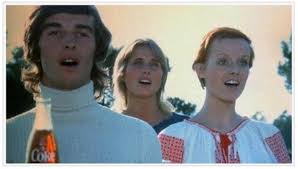 On a Sunday evening in early December 1971 I was watching a long forgotten Christmas special.  But what I remember was a commercial for Coca Cola in which a group of young people of various ethnic backgrounds was gathered on a hill singing a song called I'd Like to Buy the World a Coke.  It was also released as a single which became a top-10 hit for the New Seekers.  However, because of radio overplay I came to despise this treacly song (akin to Disney's It's a Small World).  Still, whenever I hear it I associate it with the holiday season.

Some holiday commercials can be very cloying, especially the plethora of those for cars with big red bows on top (seriously, how many people really give cars as gifts?)  However, I don't want the theme of this post to take on a negative tone since there is a bounty of wonderful Christmas ads to celebrate.  For instance, some of those by the GAP are delightful.  I dare you not to smile or have the desire to do some toe tapping ...

In 1999 Amazon ran wonderfully kitschy ads that were take offs of the Sing Along with Mitch TV show from the early 1960s.  But despite the acclaim this campaign received Amazon put its account up for review the following year and the ad agency that created these ads, Foote Cone & Building/San Francisco, resigned the account.

And during the 2013 holiday season staid K-Mart created controversy with its racy ad for its Joe Boxer line of men's briefs which showed a line of beefy gents in holiday attire performing in quasi-Chippendale's fashion to Jingle Bells (or was it Jingle Balls?). 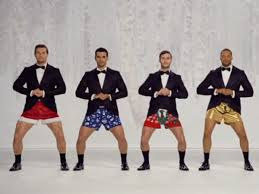 Magazines also have their share of stylish holiday-oriented ads.  Here are three from Smirnoff, Tiffany & Co. and Absolut:

This ad for Smirnoff is from the early 1990s.  It was before the flavored vodka craze hit so if you wanted a taste of peppermint back then you'd need to dip a candy cane into your drink.  Perhaps the candy cane in this ad was a subtle way of enticing kids (or kids that read The New Yorker)? 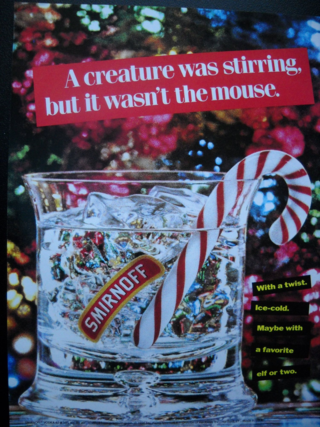 Befitting its image, Tiffany's holiday ads are classy and stylish - and, of course, they always display the famous Tiffany box. 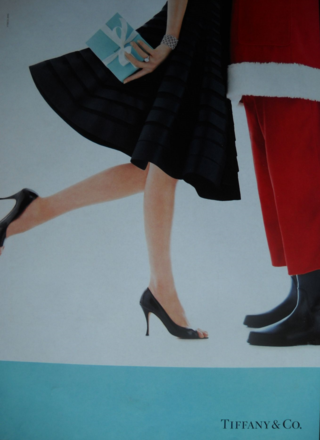 Absolut's venerated all-print campaign has been running since 1980 and was chosen by Ad Age as one of the 10 best campaigns of the 20th century.  Close to 2,000 ads have been created using clever wordplay, names of cities and designers, holidays and creative depictions of the iconic Absolut bottle.  This lovely holiday ad is from the early days of the campaign.  (If you like ads you may enjoy a coffee table book titled Absolut Book which includes 500 of the ads.) 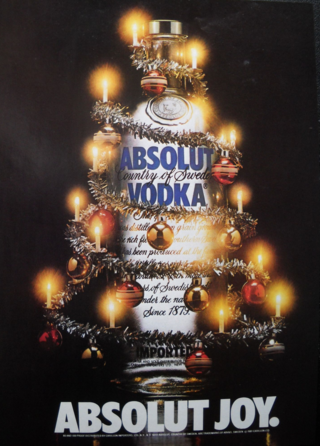 Rob, having worked at Ayer how could you forget the infamous Folger's spot where the guy omes home from college by surprise and makes coffee makes the family wake up with its aroma? Extreme schmaltz (although unusual for P&G at the time since there spots were always product benefit and not emotionally driven) except that the same commercial ran for 20 years and people started to ask when the kid would finally graduate