Until 1972 my hometown Pittsburgh Steelers had a long history of losing.  This season, however, they finished with a solid winning record (11-3) and made it to the playoffs.  On Saturday, Dec. 23 the Oakland Raiders were in Pittsburgh playing the Steelers in the AFC Divisional Playoffs.  That afternoon, while the game was being played, I was out collecting payment from customers of my morning paper route (the Pittsburgh Post-Gazette).  Since it was Christmas, instead of the usual 25 or 50 cent tips, I was collecting tips in the stratospheric $2 to $5 range. 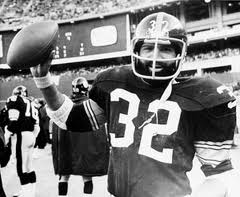 When I returned home the game was on the radio, and it didn't look good as the Raiders had a 7-6 lead very late in the game.  Then in a flash the tables were turned as a pass by Steelers quarterback Terry Bradshaw bounced off the intended receiver and landed in the hands of Steelers rookie (and NFL Rookie of the Year) Franco Harris just before it reached the ground.  He scooped it up and scooted 60 yards for the game winning touchdown with less than 20 seconds remaining.  However, it took five minutes before Harris' catch was confirmed by officials as a legitimate reception.  It was even more confusing if you weren't watching on TV as was our case since the game was blacked out in Pittsburgh. 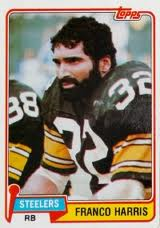 Even today it seems unbelievable that this catch happened.  And although the Steelers season ended the following week, when they lost to the undefeated Miami Dolphins, it was the beginning of the Steelers becoming one of the most successful and widely followed teams in the nation.  (To immerse yourself fully in "Steelers Nation" lore the book The Good, The Bad & The Ugly Pittsburgh Steelers is a good starting point.)