Favorite Toys of Christmases Past (1960s) 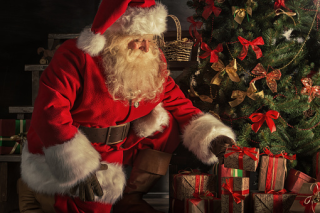 If you were a kid in the 1960s, historical events of that decade may not be easily remembered - but what Santa placed under the tree on Christmas morning is probably still etched in your mind.  Here are some of the presents I remember most fondly:

This ranks as my all-time favorite present.  It was a full dashboard of a car with working windshield wipers, turn signal indicator and ignition which made a purring motor sound when the ignition was turned on.  Little did I know back then as a 5-year-old that this would be the closest I'd come to owning a car since I've lived in Manhattan for my entire adult life and haven't needed one. 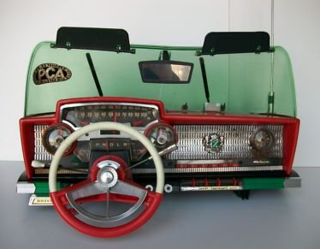 "Krispy Kritters" was a new breakfast cereal with the maniacally sung tagline of "The one and only cereal that comes in the shape of animals!" as an array of animated creatures from the savannas of Africa scooted across the TV screen in a stampede.  Linus was the spokes-animal and his stuffed likeness was a premium with box tops. 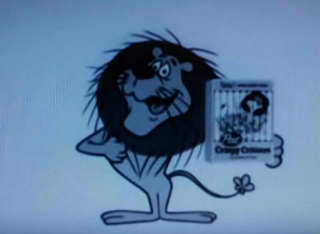 The projector showed slides of various Hanna Barbera cartoon characters.  I got a kick out of projecting the images on the ceiling of my darkened bedroom or on my pillowcase and playing around with the focus band to show the images as huge or tiny.

This was a game that required hand-slapping action onto one of four plastic hands (called the "Slam-o-Matic").  Suspense was created when a player picked a card from the deck and the other players wondered if he/she had two-of-a-kind, which would instigate slapping down of his/her assigned hand.  The last person who slapped was penalized.  Fun came when someone faked and got others to foolishly slap their hands. Because of the vigorous slapping action I worried about the plastic hands breaking off.

Using marbles as playing pieces, the route to the top of the hill included detours/holes that could lead your marble to reappear far away.  If your marble made it to the top a crown would pop up.  This game brings back a nasty memory.  On Christmas night we drove my grandmother home and upon arriving at her house I got out of the car to let her out and stepped in a large puddle of dog excrement.  On the drive home we kept the car windows rolled down and I hung my shoe out the window.  It was one of those "we'll laugh about this later" moments. 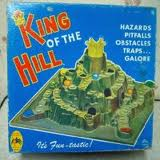 Clothes as a favorite gift for a child?  Absolutely!  This long-sleeved pullover jersey was in the style of the outfits worn by the male characters of the new CBS show Lost in Space.  I think it was the first time I was excited to get clothes for Christmas and I couldn't wait to wear it to school.  My older brother, Darrell, also got one; his was blue, mine black. 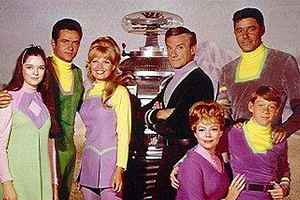 It made separate sounds for taxiing and for flying and had flashing red lights.  It was about 12 inches in length and made out of metal.  I'd walk from room to room imagining routes the plane was traveling to all over the world.  That Christmas was made memorable by the Hong Kong Flu which was raging throughout the country.  Because everyone in my family had a touch of the flu we didn't go to Christmas Mass.  Also, the first space mission to orbit the Moon, Apollo 8, took place during the holiday. 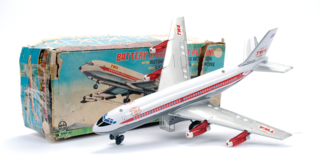 This arts/crafts kit enabled aspiring juvenile artists to make beautiful, somewhat psychedelic images through a selection of colored pens, pins and design templates.  It was a safe way for a child coming of age in the "Age of Aquarius" to experience mind expansion without using pot or LSD. 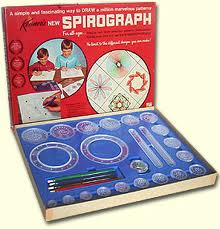 I spent many a weekend in the winter of 1970-71 in heated competition with my parents and older brother playing this variation of bowling.  We'd place the board on the kitchen table and each of us took a turn pushing out the billiard-sized wooden ball (attached to a post by a chain) in an arc.  The ball would strike miniature bowling pins.  Me and my mother were rather mellow players but my dad and brother were hyper-competitive which sometimes led to tension that occasionally lasted beyond the match.

My gushing over these cherished toys is not meant to slight the myriad other wonderful gifts I've received over the years, such as Lincoln Logs, Matchbox cars, the games Operation!, Yahtzee and Mousetrap, a miniature Lionel train set and many more.  To immerse yourself in even more toys you may want to consider the DVD Classic Toy Commercials of the 60s or the book Classic Toys of the National Toy Hall of Fame.

spirograph has the best memories for me

Does anyone remember Spirofoil? Same concept as Spirograph, but instead of paper, you "etched" the design onto a piece of pretty sturdy foil and then painted the various areas of the design with tempera paints, included in the box. The finished foil creations could then be cut out and, among other things, be worn on a piece of string as pendants. Yes, pendants. I loved both Spiro graph and Spirofoil.