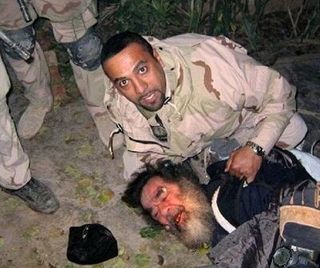 Nine months after the war in Iraq began and 4-1/2 months after his two sons were shot dead (which I heard about while on vacation in Iceland), Iraqi dictator Saddam Hussein was found by U.S. forces hiding in a hole on the grounds of a farmhouse about 80 miles from Baghdad.  On him was an AK-47, $750,000 in cash and some chocolate.

Although his capture occurred on December 13 it wasn't until the next day that the news was made public.  I was in the midst of doing holiday-related chores that snowy afternoon (i.e. shopping at Union Square's Christmas fair, writing Christmas cards, sending checks to favorite charities) when I turned on the TV to check football scores. Instead, a news report was on showing video of the capture.  On Monday the NY Times ran a scary/unflattering photo of Hussein front-and-center on Page One. 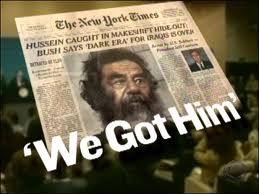 Three years later, on New Year's Eve, he was executed by hanging.  The capture (which was the real reason for the war) served as a diversion for the Bush Administration from the fruitless search for the non-existent WMDs.