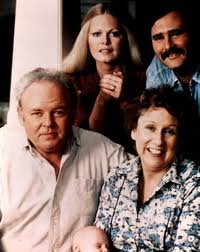 I was suffering from a bad cold the night All in the Family debuted on CBS.  For much of the show I was in the kitchen making hot tea with honey and preparing a somewhat flammable throat wrap coated with Vicks VapoRub which I heated over one of the burners of the stove.  Because of these preparations I wasn't paying full attention to the program.  However, I do remember the warning that came on before the show began about its content.  Although I was 13 at the time I didn't worry about my parents changing the channel since Tuesday was my mother's bowling night and dad was dozing in his recliner. 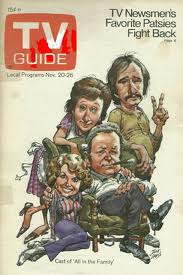 During its first season All in the Family aired on Tuesday but in its second season the show moved to Saturday where it ran for four seasons.  It was part of Saturday's legendary lineup along with The Mary Tyler Moore Show, Bob Newhart and Carol Burnett.  Some lasting memories I have include Edith going through menopause (a new concept for me) and hearing Archie refer to blacks as "jungle bunnies" (also a first).  I watched the show regularly during its first four seasons but that ended once I went away to college.  However, this spared me the pain of watching the episode in which Edith died.

The show ushered in a new era in TV in which controversial and political subject matter was addressed.  And viewers embraced it - All in the Family became the first TV show to be #1 in the ratings for five consecutive seasons (later joined by Cosby and American Idol).  It also begat Maude and The Jeffersons.  Indeed, those were the days!