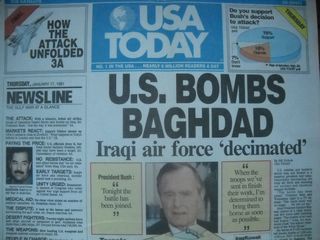 The evening the war began, Jan. 16, 1991, found me sitting at a "welcome" table in a meeting room at the Gay & Lesbian Community Center in Greenwich Village where the gay professionals group Out Professionals was holding its monthly meething.  I was treasurer and collecting the meeting fee when a member approached the desk at around 7:30 and excitedly tried telling me something.  However, because he had a pronounced stutter it took him a while to get out what he wanted to say - that the U.S. bombardment of Baghdad had begun.  (The guessing game as to when this would occur had been the week's #1 topic of conversation ever since Congress voted the previous weekend to give President Bush authority to go to war.)

The following evening, a Thursday, found me at HMV Records on the Upper West Side where I had gone after leaving a work-related function at Tavern on the Green (both establishments are now out of business).  Instead of playing music over its speakers a radio broadcast was reporting the chilling news that Iraqi missles were being fired into Israel.  At this very early stage of the war I was feeling a bit uneasy, wondering what Saddam Hussein might have up his sleeve for our troops or here on U.S. soil (he had promised the "mother of all battles").  This feeling of unease was in stark contrast to the party-hearty lyrics of a very popular song playing on the airwaves at the time - Everybody Dance by C & C Music Company.  To this day whenever I hear the song memories of the war come to mind.

(One of George Clooney's earliest films, 1999's Three Kings, was inspired by the first Gulf War.  Other war related films include Jarhead, starring Jake Gyllenhaal and Jamie Foxx, Courage Under Fire and Towelhead.)