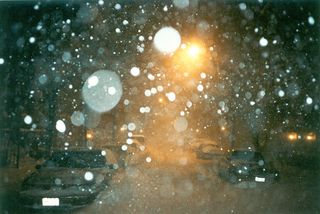 I first heard word of the impending blizzard on Saturday evening while I was out in New Jersey visiting my brother and his family for a late holiday get-together.  I was enthralled by the blizzard warning scrolling down the screen of The Weather Channel because I'd never before experienced a full-fledged blizzard.  On Sunday, Jan. 7 the snow started falling at around noon and by late afternoon it was coming down fast and furious.  That night I walked around my Greenwich Village neighborhood in the teeth of the storm (with howling winds gusting to 40-50 mph) snapping photos that were enhanced by the visual effect the flash had on the snowflakes. 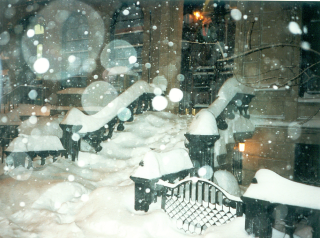 Not surprisingly, my office was closed on Monday (some co-workers from New Jersey were out for two to three days).  The snow stopped falling early in the afternoon and again I went out with my camera.  The texture and deepness of the snow brought to mind walks on the beach.  At one point I trudged over to the West Side Highway and found no rush hour traffic whatsoever.  Instead, a phalanx of garbage trucks put into service as snowplows was the only activity there and on most city streets. 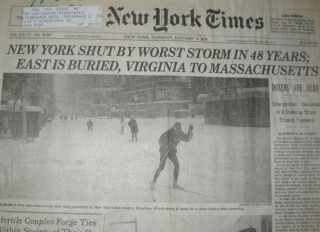 The storm was especially paralyzing in Philadelphia and NJ where two to three feet of snow fell.  It was such an expansive storm that 1-foot accumulations extended all the way westward into Kentucky and Ohio.  Here in New York 20.2" fell, with three and four-foot drifts topping cars and taxis parked on the streets.  There was no mail delivery for two days and no trash pick-up for eight.  Staten Island reported 29", Newark had 28" and La Guardia Airport picked up 24".  Manhattan's normally congested sidewalks were made even more crowded by walls of plowed and shoveled snow (in addition to bags of uncollected trash and discarded Christmas trees) that confined pedestrians to narrow pathways.  Persistent cold weather kept the snow around for a number of weeks.

At the time this was the deepest snowfall in my lifetime, topping the 17.6" that fell in a big February 1983 snowstorm.  (However, some of the snows of my childhood back in Pittsburgh, especially the 15" that fell in January 1966 and 14" in January 1964, seemed deeper because I was a few feet shorter than my adult height of 6'1".)  This blizzard contributed mightily to the winter of 1995-96 becoming New York City's snowiest winter ever.  75.6"was measured in Central Park, close to fifty inches more than a typical winter. 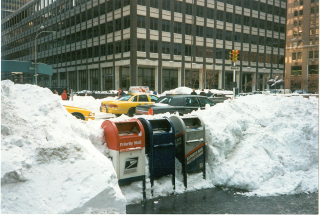 March 1993 "Storm of the Century" Immobilizes Eastern US

I remember the blizzard of 96 vividly. We had my stepsons over for the usual weekend visit with their Dad. On Sunday, the storm got so bad so quickly that we told their mother not to try to come get them. Once Gov. Whitman declared a state of emergency on Monday morning, we knew we weren't going anywhere for a while. The boys were thrilled to not have school. Their dad - a school teacher - was also free to enjoy the snow. I was inbetween jobs so I didn't have to be anywhere. We ventured outside Monday afternoon to check out the 28 inches of snow that fell in Perth Amboy. Our cars were buried. I tried to shoot videos but the wind almost knocked me over. On the Weather Channel, I have never seen a storm system so large - it really was a snow hurricane. We were fortunate that we had no trouble with electric power. The only crisis was the cable went out briefly one day - we got tired of watching videos so we started playing board games. One night, my stepson Corry and I dualed to the end in a very tense game of Risk which went on to 1 am - I won. My husband and Nick -my younger stepson - had gone to bed. We were snowed in until Wednesday.

Wow, I remember some of it as I recall a few photos I had taken - we were in Brooklyn and we had never seen so much snow in our lives - pretty and inspiring nature at work...until one had to shovel - my husband did it, not me:) That's great that you have the front page of the NY Times pictured here! Well, luckily today's won't be anywhere quite that much. Happy New Year!

Yeah, that was a great storm.The big snowstorm we had back in 2006 actually dropped 7 more than this blizzard but I think the 96 storm was deeper in my Village neighborhood. I missed our recent one -but there might be yet another biggie next week.