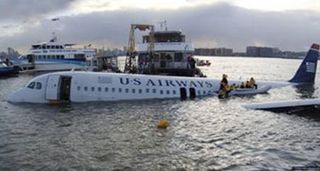 It was shortly after 3:30 on Jan. 15, 2009, a bone chilling Thursday afternoon, when I first got word about a plane crash in New York.  I had just returned home from the gym where I had done my weight workout for back and shoulders (I was between jobs at the time).  Checking my e-mails I saw a New York Times Breaking News Alert reporting that a plane had "landed" in the Hudson River.  I assumed it was a small private plane; however, after reading that it was a passenger jet I wondered how many had died (it brought to mind a plane that crashed into Jamaica Bay upon takeoff from LaGuardia in March 1992 that resulted in the drowning of 27 passengers).

I immediately tuned in to New York's cable news channel NY1 for further details and was shocked to see an intact USAirways plane surrounded by rescue boats, and then hear the remarkable news that there were no fatalities!  If I hadn't had a massage scheduled for 4:30 I might have walked over to the river to see the plane float by.  (Click here to view a news report shortly after the incident.) 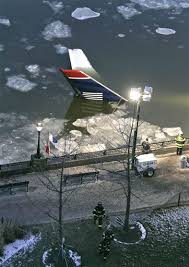 In speaking with friends over the next few days I attributed the miraculous landing to the aura of positive energy created by Barack Obama's upcoming inauguration.  I joked that if this accident had happened the year before while George Bush (and his eight years of bad karma) was still in office the flight would have been doomed and the plane would have gone directly to the bottom of the river.  I thought it fitting that this "miracle on the Hudson" dominated the news cycle, pushing from the headlines Bush's televised farewell address to Congress that evening. 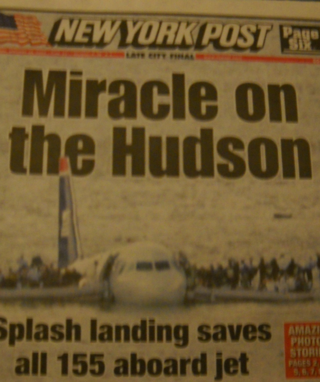 If you still haven't had your fill of this inspiring story you may find the first-hand accounts told in Miracle on the Hudson: The Survivors of Flight 1549 Tell Their Extraordinary Stories of interest.