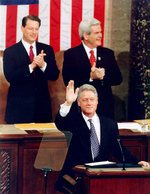 The verdict in the civil suit brought against OJ Simpson for the wrongful deaths of his wife Nicole and her friend Ron Goldman coincided with President Clinton's State of the Union Address on the night of February 4, 1997 (the first of his second term).  Word that a verdict had been reached came shortly before 7PM but the reading of it was delayed for more than three hours until all interested parties arrived at the courthouse in Santa Monica.

It was Tuesday night and I was preparing dinner after doing a weight workout at the gym.  Since both events were of high news value NBC resorted to a split screen to show both unfolding.  And although it seemed somewhat disrespectful to the President, truth be told, the verdict was largely the reason I switched on the TV.  Finally, at the conclusion of the President's address the verdict came in.  Reporters inside the courthouse signaled to the crowd gathered outside that the verdict was - guilty!  On one side of the split screen President Clinton was shown shaking hands while and on the other side a defeated Simpson was show leaving the courthouse followed by the triumphant Goldman and Brown families.  I let out a cheer. 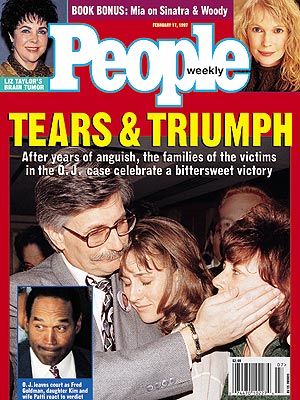 For me, this verdict took some of the sting out of the contentious not guilty verdict reached in the criminal trial in 1995.  Shortly afterward I called my friend Marina down in Baltimore to share the news.  She had passed the Maryland bar six months earlier so I asked her to explain why this type of suit could be filed after a verdict had already been rendered in the criminal case, in other words a do-over.  (I still don't understand the legal reasoning.)  Thus ended a tragic case that had been part of the nation's zeitgeist for nearly three years.  (However, it wasn't the last we'd hear from OJ.)

Well, I wonder who remembers another instance when tabloid headlines 'trumped' news of actual importance? In 1990 on the day that Nelson Mandela was released from prison after 27 years, true to form the NY Post headlined The Donald's split from Ivana and attendant details of his relationship with Marla Maples.