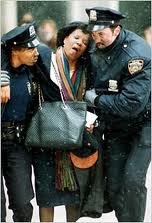 It was lunchtime on a gray and unseasonably cold Friday, with a touch of snow in the air.  Our winter intern, Sherida, and I were heading to a business lunch with an account executive from the Fox TV network at Pietrasanta, a nearby restaurant at the corner of 9th Ave./46th St.  As we walked the four blocks from our office at Worldwide Plaza (we worked at ad agency NWAyer) we noticed a plume of smoke rising in the distance from lower Manhattan.  There was also a lot of noise from the blaring horns and sirens of fire trucks racing down the street. 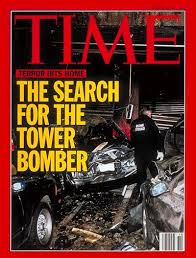 After we returned from lunch I heard the news about a truck bomb exploding in the underground parking garage of the North tower of the World Trade Center and realized that was where the smoke was coming from.  It was chilling to hear speculation that the goal of the bomb was to collapse the North tower and have it fall into the South tower.  Unfortunately, as bad as this attack was (six died, more than 1,000 were injured), it was just a prelude to the horrors of the attacks on 9-11.