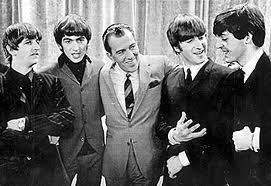 Anyone who had a teenage sister probably has memories similar to mine when the Beatles made their first American TV appearance on the Ed Sullivan Show, i.e. shrieking, screaming, perhaps even sobbing.  I was in the first grade at the time and on that Sunday night (February 9, 1964) I was sitting in the living room behind my 13-year old sister, Linda, who was seated on the floor in front of the TV set.  Occasionally I'd look up from my coloring book.  Even if I wasn't interested how could I not look up to see what was creating such a commotion?

Even before this telecast I was aware that the Beatles were a big deal.  (I remember my mother returning from a shopping trip to downtown Pittsburgh and bringing back the Beatles' first LP, Meet the Beatles, for Linda.)  I was 6-years-old at the time and completely unaware of any same-sex inclinations, yet I remember thinking that Paul was cute.  (When I turned 13 and preparing for my Confirmation I wanted my Confirmation name to be Paul, but instead I was talked into choosing George, which had family significance.) 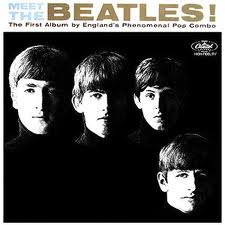 Of course, the telecast drew a huge audience.  Today, 50 years later, its 45.3 Nielsen household rating still ranks as one of the 25 highest rated telecasts of all time.  (Nowadays only the Super Bowl gets that kind of rating.)  The following week the Beatles made a second appearance on Sullivan's show and it provided another ratings bonanza.  (The complete telecasts are available on Ed Sullivan: The Beatles' Telecasts.  Additionally, a documentary by Albert & David "Grey Gardens" Maysles, The Beatles 1st US Visit, is also available.) 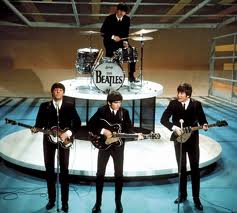 The Beatles' first appearance on Ed Sullivan caused major mayhem in our house because my 10-year old sister Claire had just gotten the first album for her birthday two days earlier. I remember her jumping up and down in front of the TV. My brother Byron, 13 at the time, was transfixed. I had just turned 6 in late December and enjoyed staying up later than normal. I thought George was the best looking of the four. I usually didn't stay up for Ed Sullivan unless ToPo Giggio the mouse was on. My strongest memory is learning the Twist to George singing Check Berry's "Roll Over Beethoven", which was the first song on that album. Sort of ironic that a cover brings back the happiest memory of that week. -Maureen