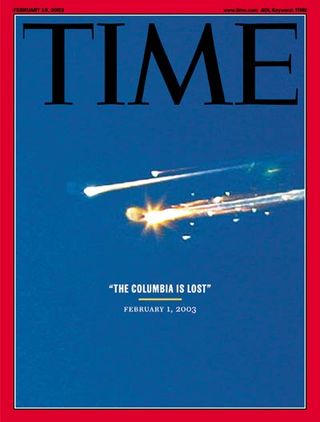 February 1, 2003 was a gray and chilly Saturday and I was immersed in my winter project, which was a makeover of my apartment.  I did it with the help of my friend William.  I supplied ideas and the capital and he made it happen, which involved painting the bedroom Arctic Blue, California Gold in the living room and the kitchen Antique White; hanging artwork; assembling a glass TV stand for my new plasma TV and drilling decorative shelving into the living room walls.  We had just returned from breakfast when we heard the news on the radio about the disintegration of space shuttle Columbia.  It happened over the skies of Dallas during re-entry into the Earth's atmosphere - just 15 minutes before it was scheduled to land in Florida.  All seven astronauts on board were killed.  By eerie coincidence NASA's two previous fatal space accidents also occurred in the dead of winter: On Jan. 27, 1967 a fire on board Apollo 1 as it sat on the launching pad killed the three astronauts on board (pictured), and on Jan. 28, 1986 the Challenger exploded shortly after takeoff, killing all seven crew members. 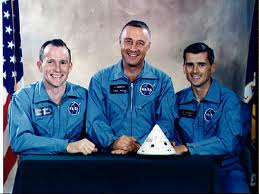