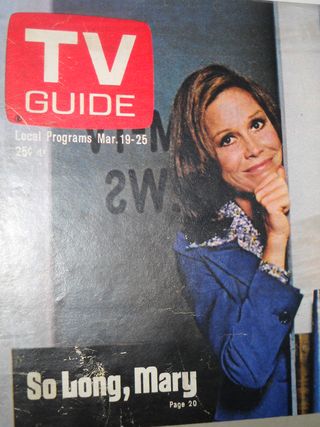 Before HBO, the rise of cable, or the invention of the VCR/DVR, Saturday was a vibrant night of programming for the Big 3 TV networks, not an afterthought, or a repository for repeats, as it is today.  In the 1970s it was a night of classic sitcoms on CBS, and in the '80s NBC and ABC had hit shows like The Golden Girls; Hunter; Love Boat; and Fantasy Island.  The Mary Tyler Moore Show was one of the crown jewels of CBS's Saturday night schedule.  Besides Mary's character, the show's other beloved characters included Mr. Grant; Ted; Murray; Sue Ann; Rhoda; Phyllis and Georgette.  The sitcom's last episode aired on March 19, 1977.  (It was curious that such a big episode was scheduled in between the February and May ratings "sweeps".)

Although I'd been a regular viewer of the show during its first five seasons, once I was away at college I rarely had the opportunity to watch it - but tonight was an exception.  I was in my sophomore year at Penn State, where I was attending a branch campus in Beaver County, about 25 miles northwest of Pittsburgh.  It was largely a commuter campus with one dormitory, which I lived in.  (I transferred to main campus in my junior year.)  The dorm often emptied out on weekends and this weekend, when Mary ended her seven-year run, was no different.  However, I stayed on campus and watched the episode alone in my dorm room on my roommate's little black and white set while I sat on my bed doing school work.

This funny episode (everyone at TV station WJM was fired, except for Ted Baxter) ended with the touching group huddle pictured above.  It posted a Nielsen household rating of 25.5.  Although it wasn't a blockbuster rating like that delivered by the finales of M*A*S*H (60.2 HH rating); Cheers (45.5); or Seinfeld (41.3), it was a solid bump from its 20.5 season average.  Hats off to Mary! (Pun intended.)

(Oddly, the final season of Mary Tyler Moore, as of March 2013, had yet to be released on DVD).  However, if you'd like to purchase any of the first six seasons click here.)