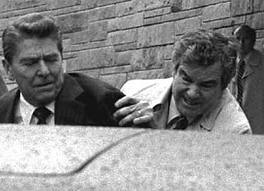 It was a gray, showery Monday afternoon and I was in a meeting in a conference room at my office, ad agency Scali McCabe Sloves, where I was a media planner on the Volvo auto account.  This was my first job out of college and I was coming up on my 2-year anniversary.  The last person to enter the room before the meeting started reported that President Reagan had been shot, but she had no further details.

I don't recall anyone acting overly concerned - I suppose we were a room full of Democrats.  And I wasn't alarmed over this news, perhaps because it seemed too shocking to comprehend something as bad as this happening so early in his presidency - and I thought back to the two attempts made on Gerald Ford's life which he survived (but no bullets hit him).  Also, I was still in disbelief that Reagan had been elected president, so I rationalized that if he didn't pull through Vice President George Bush would be more suitable.  But Reagan lived - the first president to survive after being struck by a bullet.

The biggest impact for me was that the Academy Awards were delayed one day out ofr respect fo the former actor.  (Up until 1999 the Oscars were handed out on a Monday night.) 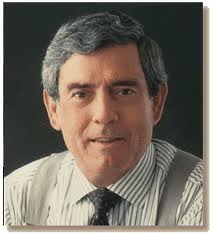 Reagan's shooting would be Dan Rather's first big news event since replacing Walter Cronkite as anchorman of the CBS Evening News three weeks earlier.  And at the end of the week my life became upended when my loft space in Tribeca was burglarized.  By coincidence, my friend Marina's apartment on the Upper East Side had been burglarized almost one year to the date of my burglary.  (Back then it seemed your first burglary was a right of passage when you lived in Manhattan.)

The Sudden Death of FDR

Gore vs. Bush: Too Close to Call

Teddy Roosevelt got shot mid-speech and still completed it. He's one of my favorite presidents :-P

I was a journalism student at the University of Florida that spring. I had gotten home from classes and turned on the tv to see the news on - earlier than usual so that got my attention. I always watched the ABC afiliate in Gainesville so ABC news anchor Frank Reynolds was on. I switched back and forth between him and Dan Rather on CBS. I remember Dan saying that it was believed that James Brady had died. When I switched back to ABC, I caught Frank Reynolds going into a meltdown because he did not want to say Brady was dead unless he could confirm the source. Good for him - it turned out Brady did not die! Talk about a lesson learned for a student journalist. Being first doesn't count if you get it wrong. I always had a lot of respect for Frank Reynolds and was never that impressed with Dan Rather as an anchor - he always did better as a reporter. I wasn't that shocked that Reagan got shot but I was surprised he survived. I was horrified when he was elected the previous fall.