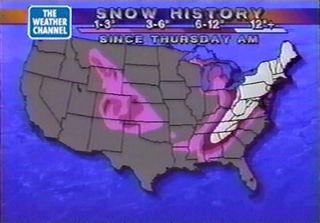 On Feb. 26, 1993 New York, and the nation, was shaken by a terrorist bombing in a parking garage under the World Trade Center.  Two weeks later Mother Nature was preparing her own assault as a monster storm swept up the East Coast.  I didn't pay much attention to news of the impending storm until the night before it hit, a Friday.  After work I had gone out with friends to Splash, a sprawling new gay bar in Chelsea.  Once home I turned on the Weather Channel to learn more about the approaching "white hurricane".  (And the first day of Spring was just one week away).

The storm's full fury hit New York Saturday morning (March 13) and continued thru mid-afternoon.  (This photo, near my apartment in Greenwich Village, was taken at around noontime.)  However, after ten inches of snow had fallen, a changeover to sleet and rain began in late afternoon, keeping the accumulation down.  I was outside when the changeover began and the sleet pellets really stung because they were being propelled horizontally by winds gusting between 40-60 mph.  The noise the sleet created as it lashed against the windows in my apartment was deafening.  I was concerned that my floor to ceiling living room window might blow in so I pulled down the blind. 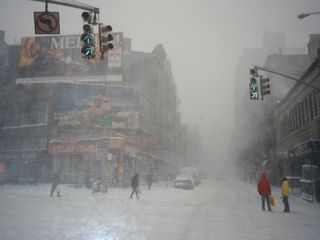 Happily, I suffered no window damage, but after the storm subsided (at around midnight) that's when my problems started.  Hearing a dripping sound, I looked up and saw that the ceiling in one corner of my living room was cracking and buckling.  It turned out that the snow on the roof (I lived on the top floor) had piled up high enough to cover a drain pipe, so melting snow had nowhere to go and collected in one spot.  I was thankful to be home so I could move my sofa and TV out of harm's way.  However, I couldn't get in touch with my building super so I had to make due with a collection of pots and pans to collect the dripping water.  However, the steady "ping" of the dripping made sleep nearly impossible. 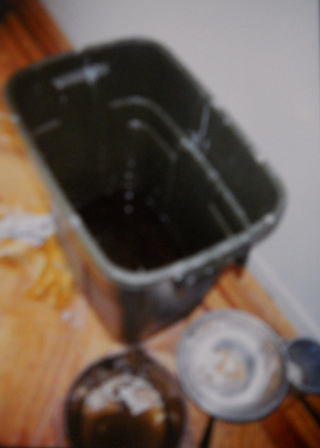 The next morning I got up early and found the super shoveling snow.  He was unable to go up on the roof and clear the blockage because snow was drifted against the door so he brought up two large trash bins to my apartment to collect the water which poured out when he poked a few holes in the ceiling.

Compared to other parts of the Eastern US, New York was spared paralyzing amounts of snow (a nearby street in my neighborhood is pictured below).  Elsewhere, however, there were record accumulations not only in the Northeast (Pittsburgh had 26", Syracuse 36") but in the South as well, e.g., Atlanta had 9"; Birmingham 13"; Chattanooga 23".  Even Mobile, Alabama, on the Gulf Coast, reported three inches of snow!  The Weather Channel would later rank the storm, which affected nearly half of the US population and left more than 250 dead, as one of the top five weather events of the entire 20th century. 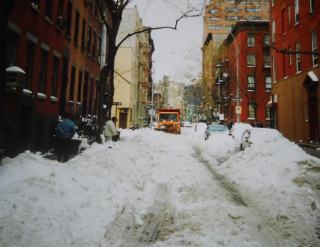