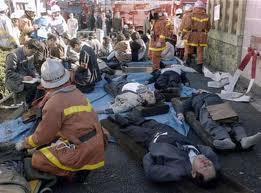 I was starting a new job on March 20, 1995 at ad agency Foote Cone & Belding where I was hired as media research director of its New York office.  When my clock radio went off that Monday morning is when I first heard the news about the gas attacks on Tokyo's metro system during the morning rush hour.  Members of a Japanese religious cult known as "Supreme Truth" carried out the attacks by puncturing small packages containing a liquid form of the lethal gas, sarin.  They did this on three train lines; once leaked, the liquid turned into a vapor which felled thousands of passengers and killed twelve.

Of course, this was especially chilling for the millions of us who used New York's subway system to commute to work every day.

One month later homegrown terrorism visited our own shores when a truck bomb laden with explosives tore apart the Alfred P. Murrah Federal Building in Oklahoma City, killing168.  Unlike the Japanese terrorists, one of those charged in the U.S. attack, Timothy McVeigh, was executed.

Then five years later an episode of a new show on CBS, Now and Again, brought to mind the Tokyo attacks.  A villain known as the Eggman (played by Chinese actor Kim Chan) cracked open eggs filled with noxious gas on a New York subway.  All of the passengers died, but in a somewhat more gruesome fashion than those who died in Tokyo.