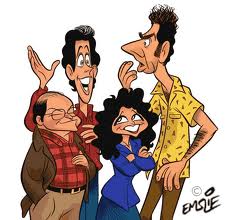 Until today the biggest event to occur on my birthday was in 1967 when Mickey Mantle hit his 500th home run.  And in 1981 I feared the pope might die on my birthday after he was shot the day before (happily, he survived.)  But then on May 14, 1998 two big pop culture events occurred: the final episode of Seinfeld and the death of Frank Sinatra.  I watched the disappointing one-hour finale (from a mostly dissatisfying last season) with my friends Matthew and Gary at Matthew's apartment on West 57th St.  Although it was my birthday they weren't aware of it, so when our Chinese take-out arrived I felt odd saying "hey, it's my birthday, are you expecting me to contribute?", so I kept quiet.  (A week earlier I figured I'd be spending this day with my boyfriend, but that relationship suddenly unraveled during a rainy weekend out at Fire Island.)  When I woke up the next morning is when I heard the news that Sinatra had died the previous evening.

This episode of Seinfeld telecast delivered a 41.3 household rating/58 share, making it the second highest rated show of the season (behind the Super Bowl).  A powerhouse performance for sure, but it was 9% below the last episode of Cheers five years earlier.

In addition to Sinatra, some other notable deaths on May 14 were those of Billie Burke (Glinda the Good Witch from The Wizard of Oz) in 1970; Hugh Beaumont (the father in Leave it to Beaver) in 1982; and 1940s va-va-voom actress Rita Hayworth in 1987.

(If you're a Seinfeld fan but have overdosed from watching it in syndication, a refreshing change might be reading about the show in Seinfeld, Master of its Domain: Revisiting TV's Greatest Sitcom.)

I miss Seinfeld. The only comedy show I've seen recently that is as creative is It's Always Sunny in Philadelphia, but it's not as good.

First - Happy Birthday, Rob!!!!
The last episode of Seinfeld was a non-event for me. I got tired of the show about 4 years in and had moved on. I also did not mourn the passing of old blue eyes who was referred to our NJ home as "that bum from Hoboken." My mother never like him because of his assumed ties to the mob. Too many people outside NJ think everyone in NJ is in the mob - which is why I never appreciated The Sopranos either. There are two shows that broke my heart when they ended - The Mary Tyler Moore Show and The West Wing. Just great writing, casting, funny and insightful in their respective eras. Another great potential classic was "Mad About You" but they "jumped the shark" when the baby's first word was schmuck. It was wonderful until that whincing moment. Now I hope "Modern Family" finds its audience before ABC kills it prematurely like they did "Pushing Daisies." We watch too much TV anyway.

Yeah, my mother was never a fan of Sinatra's ... nor Tony Bennett. And not to worry about "Modern Family" since it's ratings are much, much better than that of "Pushing Daisies". In fact, it's one of the highest rated of the new shows this season.