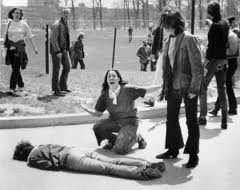 It was a mild but sort of hazy Tuesday afternoon.  Rather than take the bus home from school (7th grade at Sto-Rox Middle School) I walked because I stopped off for a haircut.  When I got home I saw that morning's paper, the Pittsburgh Post-Gazette, on the hassock in the living room.  On the front page was a photo (now iconic) of an overwrought young woman kneeling over the body of a student shot dead at Kent State University by the Ohio National Guard.  The shootings occurred the day before during an anti-war demonstration protesting the US invasion of Cambodia at the end of April.  Guardsmen opened fire on students, killing four and wounding nine.  Although it was in neighboring Ohio, I had never heard of the university. 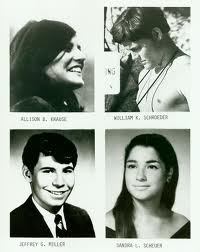 The four students who were shot dead

Perhaps because I was just 12 at the time (and somewhat preoccupied by the onset of puberty) I don't recall there being much talk about this incident among schoolmates or teachers, and at home we usually didn't discuss news events at the dinner table.  But the constant coverage of the Vietnam War was plenty worrisome for my parents since my brother, Darrell, was nearing draft age.  (A lasting memory of the war was hearing the weekly casualty report on the radio while I was getting ready for school.) 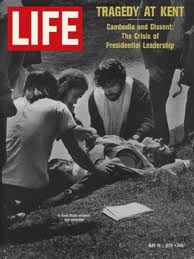 However, once the anti-war song Ohio by Crosby, Stills, Nash & Young became popular during the summer the shootings had more resonance with me.  The song begins with the line: "Tin soldiers and Nixon's coming, we're finally on our own.  This summer I hear the drumming. Four dead in Ohio." (The CD Steal This Record provides a collection of some other notable protest songs from the 1960s).  By the time I turned 18 in 1975 the US was out of Vietnam (the fall of South Vietnam to the Communists occurred two weeks before my birthday) and teen boys were no longer required to register for the draft. 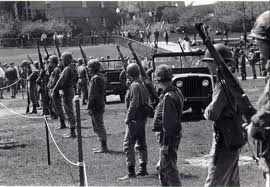