Of all the natural disasters that wrack our planet, a volcanic eruption seems the most exotic, something I expect in the Andes or Pacific islands (or Pompeii) - but not in the U.S.  But on the morning of May 18, 1980 Mount St. Helens, a largely inactive volcano straddling the border of Oregon and Washington, erupted.  And although it was a frightening occurrence for those living in the Pacific Northwest, I don't think many of us living in the East appreciated how serious the eruption was.  One photo etched in my memory showed a young boy who had been asphyxiated lying face-up in the back of a pickup truck covered in ash.  In total, more than 60 people died from the eruption. 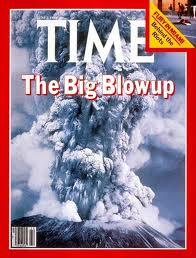 My memory of the disaster is linked to my first visit to Provincetown, a largely gay resort at the tip of Cape Cod.  It was Memorial Day weekend and I drove there with my boyfriend Gordon.  We left from Poughkeepsie (he lived there and I took the train up from New York after work) and drove there on Friday night.  This holiday trip was memorable because it was the first time I tried marijuana - and it wasn't a pleasant experience.

Rather than smoke it Gordon put the pot in a Pepperidge Farm chocolate sandwich cookie (which I don't think they make anymore).  I became paranoid, which wasn't a nice feeling, especially in unfamiliar surroundings, and I remember thinking that two female friends of Gordon's were witches.  (Alas, because of how I reacted I never became a regular user.)  The trip back on Monday afternoon was stressful because of heavy traffic on the only road off the Cape.  Throughout the weekend the news reported on the effects of the eruption of the volcano.

That sounds like a HORRIBLE way to try Marijuana...